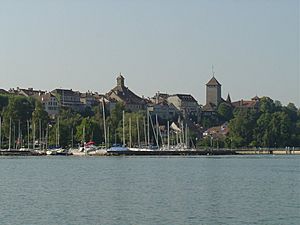 The historic city of Murten, seen from the lake with the same name.

Murten (French: Morat) is a city in the canton of Fribourg in Switzerland. It is a historic city on the south side of Lake Morat. The name of the city first appears in 515 as Muratum. The name is probably related to Celtic Moridunum. This is made from Mori (lake), and dunum (castle, fortification). The city used to be part of the duchy of Burgundy. It got city rights in 1337.

Today, about 6,000 people live there. Almost all of the old parts of the city still exist. In 2000, about 77% of the people spoke German, 13% spoke French, and about 2% spoke Italian. About 19% of the people living there are foreigners.

All content from Kiddle encyclopedia articles (including the article images and facts) can be freely used under Attribution-ShareAlike license, unless stated otherwise. Cite this article:
Murten Facts for Kids. Kiddle Encyclopedia.