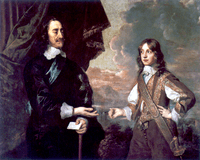 Charles I of England and his son, the future James II

A royal house or royal dynasty is a family title, or family name of sorts. It is used by royalty. It usually means the members of a family in old and young people, who are loosely related. Unlike most western people, a great number of the world's royal families do not have family names, and those that have them do not use them often. They are referred to instead by their titles, often related to an area ruled or once ruled by that family. Royal Houses still exist today.

The majority of these nations are now republics or part of republics. The Princely Houses of Germany often have given their own names to the states they ruled.

All content from Kiddle encyclopedia articles (including the article images and facts) can be freely used under Attribution-ShareAlike license, unless stated otherwise. Cite this article:
Royal house Facts for Kids. Kiddle Encyclopedia.