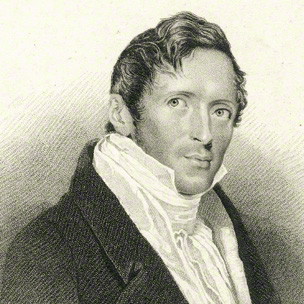 Sir Thomas Stamford Bingley Raffles (July 6, 1781 – July 5, 1826), also known as Stamford Raffles, was the founder of the city of Singapore, and is one of the most famous Britons who expanded the British Empire.

Raffles was born on a ship Ann to Captain Benjamin Raffles and Anne Raffles. Although his family was in debt, they managed to give him money for his education. When he was 14, he started working as a clerk in the British East India Company. The company sent him to Southeast Asia to look for another port as the trade between Britain and China is increasing.

He married Olivia Mariamne Fancourt, who was a widow of Jacob Cassivelaun Fancourt, an assistant surgeon in Madras who had died in 1800.

When the British East India Company sent Raffles to Southeast Asia to look for a port, the company already had two ports, Penang and Bencoolen. However, these two ports were at a place far from the main trading area, the Straits of Melaka. Dutch's ports, Melaka and Java, were closer to the trading area, which made them able to control the trade. They cut off the trade between Penang and the important trading centres at the Malay Archipelago.

The British East India Company thus needed a new port south of Melaka to protect British ships, and so they chose Singapore for it had a lot of drinking water and a good location, in the centre of the Straits of Melaka.

All content from Kiddle encyclopedia articles (including the article images and facts) can be freely used under Attribution-ShareAlike license, unless stated otherwise. Cite this article:
Stamford Raffles Facts for Kids. Kiddle Encyclopedia.