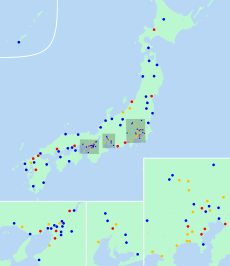 Designated cities are delegated many of the functions normally performed by prefectural governments in fields such as public education, social welfare, sanitation, business licensing and urban planning. The city government is generally delegated the various minor administrative functions in each area, and the prefecture government retains authority over major decisions. For instance, pharmaceutical retailers and small clinics can be licensed by designated city governments, but pharmacies and hospitals are licensed by prefectural governments.

Cities designated by government ordinance have been established since 1956.

To become a candidate for designated city status, a city must have a population greater than 500,000. An application for designation is made by a city with the approval of both the city and the prefectural assemblies.

During the ensuing Japanese economic growth period, the government required designated cities to be forecast to reach a population of 1 million within the near future, but the requirement was dropped in 2005.

The first form of the designated city system was enacted under Japan local government system in 1878 with the introduction of "wards." Under that system, wards existed in every city. The municipal system enacted in 1889 replaced ward assemblies with city assemblies.

All content from Kiddle encyclopedia articles (including the article images and facts) can be freely used under Attribution-ShareAlike license, unless stated otherwise. Cite this article:
City designated by government ordinance Facts for Kids. Kiddle Encyclopedia.