Shizuoka is the capital city of Shizuoka Prefecture, Japan, and the prefecture's second-largest city in both population and area. It has been populated since prehistoric times. As of 1 December  2019 (2019 -12-01)[update], the city had an estimated population of 690,881 in 106,087 households, and a population density of 489 persons per km².

The city's name is made up of two kanji, 静 shizu, meaning "still" or "calm"; and 岡 oka, meaning "hill(s)". In 1869, Shizuoka Domain was first created out of the older Sunpu Domain, and that name was retained when the city was incorporated in 1885. In 2003, Shizuoka absorbed neighboring Shimizu City (now Shimizu Ward) to create the new and expanded city of Shizuoka, briefly becoming the largest city by land area in Japan. In 2005, it became one of Japan's "designated cities". 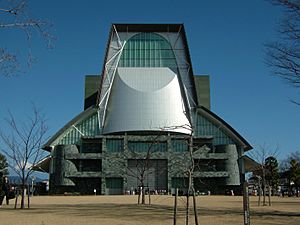 All content from Kiddle encyclopedia articles (including the article images and facts) can be freely used under Attribution-ShareAlike license, unless stated otherwise. Cite this article:
Shizuoka (city) Facts for Kids. Kiddle Encyclopedia.