Dinosaur brains and intelligence are interesting topics. Dinosaurs were once regarded as stupid animals, but it is now realised that some of the smaller carnivores had above average intelligence for reptiles. This idea led to exaggerated portrayals in films like Jurassic Park.

Brain cavity of S. stenops is in red

The idea that Stegosaurus had a "brain the size of a walnut" (an oft-repeated phrase), was not quite accurate. It had a brain the size of a dog's, but in proportion to its body, the brain was very small. In the 1880s a well-preserved Stegosaurus braincase allowed Othniel Charles Marsh to get a cast of the brain cavity, which gave an idea of the brain size. The endocast showed that the brain was indeed small: relative to body size, maybe the smallest among the dinosaurs. The fact that an animal weighing over 4.5 metric tonnes (5 short tons) could have a brain of no more than 80 grams (2.8 oz) led to the idea that dinosaurs were unintelligent, an idea now largely rejected.

Marsh also noted a large canal in the hip region of the spinal cord, which could have accommodated a structure up to 20 times larger than the famously small brain. This may have been used to coordinate the hind region in defence against theropod attack. This function for the "second brain" is not proved by any direct evidence.

Brain size usually increases with body size in animals (is positively correlated). That means large animals usually have larger brains than smaller animals. The relationship is not linear however. Generally, small mammals have relatively larger brains than big ones. Mice have a direct brain/body size ratio similar to humans (1/40), while elephants have comparatively small brain/body size (1/560), though elephants are obviously quite intelligent animals.

The formula for the curve varies, but is usually given as Ew(brain) = 0.12w(body)2/3. As this formula is based on data from mammals, it should be applied to other animals with caution. For some of the other vertebrate classes the power of 3/4 rather than 2/3 is sometimes used, and for many groups of invertebrates the formula may give no meaningful results at all.

Intelligence in animals is hard to establish, but the larger the brain is relative to the body, the more brain weight might be available for complex cognitive tasks. Rather than simply measuring raw brain weight, the EQ formula makes for a ranking of animals. The ranking coincides better with the observed complexity of behaviour. Mean EQ for mammals is around 1, with carnivorans, cetaceans and primates above 1, and insectivores and herbivores below. It also puts humans at the top of the list. The relationship between brain-to-body mass ratio and complexity of behaviour is not perfect, because other factors also influence intelligence. These factors include the evolution of the recent cerebral cortex and different degrees of brain folding. This increase the surface of the cortex, which is positively correlated to intelligence in humans. 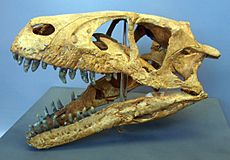 Traditional comparisons of brain volume to body mass in dinosaurs have estimated brain size as the volume of the endocast. However, the brain of the modern reptile genus Sphenodon fills only about half of its endocranial volume. Some paleontologists used this fifty percent estimate in their estimates of dinosaur brain volume. Other workers have observed that details on the endocranial surface indicates that some fossil reptiles had brains that occupied a much larger portion of the endocranium. Larsson notes that the transition from reptiles to birds prevents using a set ratio from being a valid approach to estimating the volume of the endocranium occupied by a dinosaur's brain.

Adding difficulty is the wide range of estimates for live mass. One study estimated that the live masses for many dinosaur genera had a four-fold range. Larsson laments that "[t]he broad ranges of body mass estimates, combined with the ambiguous ratio of endocranial volume occupied by the brain, present a high degree of uncertainty for [creating an] index of brain size". Consequently, he attempted to minimize errors by making a different kind of comparison.

While it is difficult to estimate the absolute volume of the brain, the proportions of its various regions of the brain should be the same in the endocast as it was in the live brain. Larsson's study compared the ratio of the cerebrum, which is clearly marked on the inside of skulls, to the rest of the endocast's volume. According to Larsson, his technique is superior to traditional comparisons of brain volume to estimated live body mass. 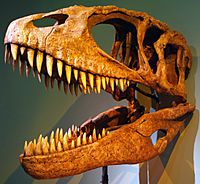 Skeletal cast of Troodon inequalis.
Troodontids had some of the highest non-avian EQs. So, they had advanced behaviour and keen senses.

Most dinosaurs, and most theropods, had brains no better than present-day reptiles, so far as can be estimated. In a 2001 study of a Carcharodontosaurus saharicus endocast, Hans Larsson found that both C. saharicus and Allosaurus had a ratio of cerebrum to brain volume that was very similar to non-avian reptiles. By contrast, the Tyrannosaurus ratio was slightly in the direction of a more bird-like proportion. Since tyrannosaurs are relatively basal coelurosaurs, this is evidence that the advent of the Coelurosauria marks the beginning of a trend in theropod brain enlargement.

Troodon's cerebrum-to-brain-volume ratio was 31.5% to 63% of the way from a nonavian reptile proportion to a truly avian one.

Archaeopteryx had a cerebrum-to-brain-volume ratio 78% of the way to modern birds.

The method used for Larsson's comparison was not the EQ, but a ratio of the size of the cerebrum to the whole brain. The cerebrum is chiefly responsible for what might be called 'intelligent behaviour'.

The brains of dinosaurs were generally much like other reptiles in their proportions. The exception is the coelurosaurs, which had cerebra proportionately larger than most reptiles, but proportionately smaller than modern birds.

All content from Kiddle encyclopedia articles (including the article images and facts) can be freely used under Attribution-ShareAlike license, unless stated otherwise. Cite this article:
Dinosaur brains and intelligence Facts for Kids. Kiddle Encyclopedia.