FC Dallas is an American soccer team. They play in Major League Soccer in Frisco, Texas, a suburb of Dallas, Texas. The team is a founding member of the MLS. Before 2005, they were known as the Dallas Burn. The team is owned by Clark Hunt, who also owns the Columbus Crew and the National Football League team Kansas City Chiefs. 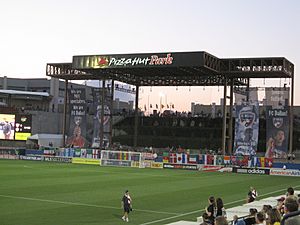 From 1996–2002 the team played in the 92,100-capacity Cotton Bowl in Dallas. To save money the club played its 2003 home games at Dragon Stadium, a high school stadium in Southlake, a Fort Worth suburb. The soccer team moved back to the Cotton Bowl for the 2004 season. The club lost money in the high school stadium because Texas law does not allow sale of alcohol on a public high school campus. In August 2005, the club moved into Pizza Hut Park, a soccer stadium in the northern suburb of Frisco. The contract that allowed Pizza Hut to put its name on the stadium ended in January 2012, and the stadium was renamed FC Dallas Stadium. In September 2013, a new sponsorship contract was signed with Toyota, and the stadium was renamed Toyota Stadium.

All content from Kiddle encyclopedia articles (including the article images and facts) can be freely used under Attribution-ShareAlike license, unless stated otherwise. Cite this article:
F.C. Dallas Facts for Kids. Kiddle Encyclopedia.