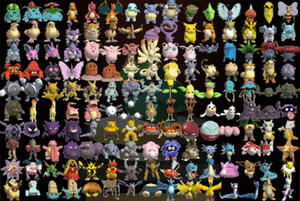 The first 150 Pokémon as they appear in Pokémon Stadium, starting with Bulbasaur in the top left corner and ending with Mewtwo in the bottom right corner

This is a complete list of Pokémon, fictional creatures from the Pokémon series. This list covers over 600 Pokémon species.

*These pre-evolved Pokémon were introduced in generations following introduction of the species they evolve into (and after the 2nd, which introduced breeding). The pre-evolutions will only hatch from eggs produced under special conditions. All other eggs will hatch directly into the next stage of evolution.
†Marked as Mythical Pokémon for at least one game entry. These Pokémon cannot be encountered and caught in the course of normal gameplay, Lugia and Ho-Oh are special cases in that are Mythical only in Game Boy Advance (GBA) versions but legendary in other versions, where they can be obtained by normal gameplay.
‡In Pokémon Black and White. However, Zorua and Zoroark are not Mythical Pokémon, because they are required to complete the Pokédex in Pokémon Black and White.

All content from Kiddle encyclopedia articles (including the article images and facts) can be freely used under Attribution-ShareAlike license, unless stated otherwise. Cite this article:
List of Pokémon Facts for Kids. Kiddle Encyclopedia.