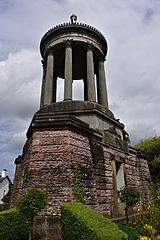 This is a list of over sixty known memorials (statues, busts, fountains and buildings) to the Scottish poet Robert Burns. Of these, the oldest outdoor statue is given to be at Camperdown, Victoria, Australia (1830). 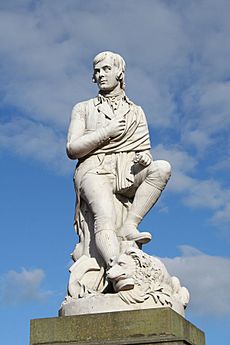 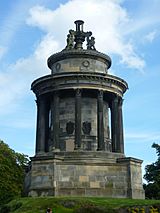 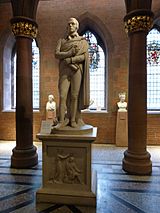 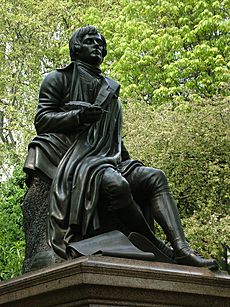 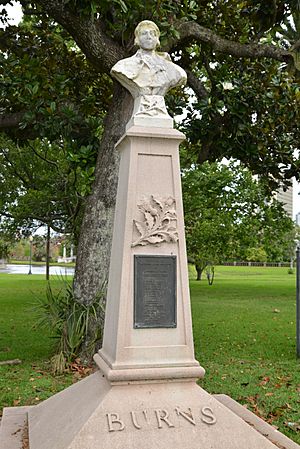 Statue in Confederate Park, by the Robert Burns Association of Jacksonville, Florida

Other than text of his poems, a plow may be present to represent his earlier vocation as a farmer. Several statues show Burns' dog, Luath.

A number of statues of Burns, and the friezes around the plinths, are reproductions of an original work.

Sculptor George Anderson Lawson's original work of Burns with right arm folded above the left, in Ayr, Scotland, in 1892 can be seen at:

It has also been reported a second small copy was presented to the Sorbonne University, Paris, France, in 1938. It was then hidden during the German military occupation of France, and so avoided being melted down. Its present whereabouts is unknown.

William Grant Stevenson's Kilmarnock design of Burns holding a book in the left hand whilst the right hand holds the lapel, can be seen at:

The Frederickton, Canada (1906) statue is also in the Kilmarnock style.

John Steell has four copies of Burns seated on a stump, looking pensively to the upper right:

All content from Kiddle encyclopedia articles (including the article images and facts) can be freely used under Attribution-ShareAlike license, unless stated otherwise. Cite this article:
List of Robert Burns memorials Facts for Kids. Kiddle Encyclopedia.