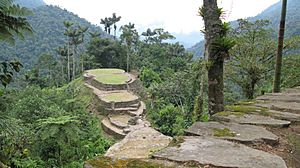 Ruins of Ciudad Perdida, a city built by the Tayrona in the Sierra Nevada de Santa Marta, Colombia

A lost city is a city that was normal once but, for some reason, became not lived in any more and forgotten about. Many of these cities are called ghost towns.

All content from Kiddle encyclopedia articles (including the article images and facts) can be freely used under Attribution-ShareAlike license, unless stated otherwise. Cite this article:
Lost cities Facts for Kids. Kiddle Encyclopedia.