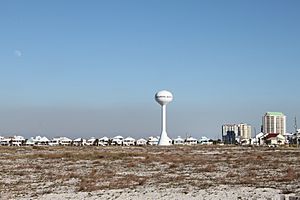 Navarre Beach is an unincorporated community in Santa Rosa County in the U.S. state of Florida. It is on Santa Rosa Island, a barrier island in the Gulf of Mexico. The community is considered part of the Pensacola–Ferry Pass–Brent Metropolitan Statistical Area.

Immediately to its east is Navarre Beach County Park, formerly one of Florida's state parks. Immediately to its west is a portion of the Gulf Islands National Seashore, and further west is the city of Pensacola Beach. To the north, across Santa Rosa Sound and on the mainland, is the community of Navarre. 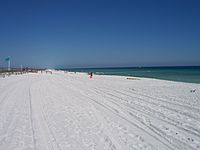 Much of the 1978 film Jaws 2 was filmed at Navarre Beach. Hotel scenes in the movie were filmed at the Navarre Beach Holiday Inn, a complex subsequently destroyed by Hurricane Ivan. A 160-room SpringHill Suites hotel is expected to begin construction on the former Holiday Inn site in 2015 to replace the former complex.

A new pier was built to replace the one damaged during Hurricane Ivan. The project was completed in May 2010.

On March 26, 2006 a "Beach Renourishment" project got underway to restore sand lost due to the hurricanes of 2004 and 2005. This project eventually added approximately 200 feet (61 m) of sand and a 14-foot (4.3 m) high berm to the Gulf side of Santa Rosa Island for the entire length of Navarre Beach. The project was completed in December 2006. In 2016 the beach restoration resumed and has brought many nice sea shells to the surface along with other treasures.

All content from Kiddle encyclopedia articles (including the article images and facts) can be freely used under Attribution-ShareAlike license, unless stated otherwise. Cite this article:
Navarre Beach, Florida Facts for Kids. Kiddle Encyclopedia.