Newton Heath is an area of Manchester, England, 2.8 miles (4.5 km) north-east of Manchester city centre and with a population of 9,883.

Historically part of Lancashire, Newton was formerly a farming area, but adopted the factory system following the Industrial Revolution. The principal industry in the area became engineering, although many were employed in the mining and textiles industries in the thriving areas of Clayton Vale and Bradford.

Newton included what is now Miles Platting and it stretched to Failsworth. It was bounded by brooks and rivers on all four sides — the River Medlock, Moston Brook, Newton Brook and Shooters Brook. With the creation of Miles Platting the remainder of Newton became known as Newton Heath.

Manchester United F.C. has strong links with the area, having been formed from the Newton Heath Lancashire and Yorkshire Railway Football Club. 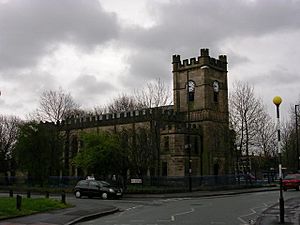 French Huguenots settled in the area in the 16th century to avoid continental persecution, and brought cotton and linen weaving and bleaching skills with them. The arrival of textile mills saw Newton Heath's cottage industry change forever into a fully mechanised mass production system – in 1825 Newton Silk Mill (which exists to this day) was built and the Monsall Silk Dye Works followed soon afterwards.

The Rochdale Canal made movement of raw materials and finished products a practical reality. Later came other industries, including a soap works, Elijah Dixon's match manufacturing factory, and rope works as well as engineering and glass making works. Many small back-to-back low cost houses were built to house the new migrant work force. Thus was Newton changed irrevocably from a farming area into an industrial one.

From 10 February 1883 until the slum clearances of the 1970s there was a Salvation Army corps on Thorp Road.

Newton Heath was home to a number of famous companies such as Mather & Platt, who established a vast engineering works producing pumps, electrical machinery and fire sprinkler systems. The aircraft manufacturer Avro was also based in Newton Heath before relocating to sites at Chadderton and Woodford. Another local engineering company was Heenan & Froude, who designed and manufactured the structural steelwork for Blackpool Tower.

The Wilson's & Co brewery on Monsall Road was founded in 1834. The company merged with rival brewer Walker & Homfrays in 1949. Wilson's and its estate of tied houses were acquired by Watney Mann in 1960. The Wilson's brewery closed in 1987 when production was moved to Halifax.

The parish was the birthplace of the Newton Heath Lancashire and Yorkshire Railway Football Club which was established in 1878 and later became Manchester United. It began life as a football team formed by Frederick Attock a Liverpudlian, who was a superintendent engineer of the Lancashire and Yorkshire Railway (L&YR). The team played on a pitch at North Road, and were initially outfitted in green and gold jerseys. By 1892, they had been admitted to the Football League. The club remained in the area until 1893, when it moved to new premises at Bank Street in nearby Clayton. The name was changed to Manchester United Football Club in 1902.

Newton Heath FC's biggest successes were its election to the First Division on its expansion in 1892 and winning the Lancashire Cup in 1898.

Ten Acres Lane was the proposed site of a new five thousand capacity stadium for F.C. United of Manchester which the club intended to move into in time for the start of the 2012–13 season.

Manchester City Council gave planning permission for the stadium on 25 November 2010. However, due to local government funding cuts, the project was halted at the planning stage. Manchester City Council were forced to review their offer and the existing Ten Acres Lane site is now to be developed for other purposes. F.C. United instead moved into a partnership arrangement with Moston Juniors Football Club, building a new stadium, Broadhurst Park in nearby Moston in 2015.

Newton Heath is an urban area and is surrounded by Monsall, Moston, Failsworth, Miles Platting, Bradford and Ancoats. It lies along the south as the A62 (Oldham Road), the main road between Oldham and Manchester city centre.

The district of Clayton also neighbours Newton Heath. The area between the two districts is called Clayton Vale; although it was a former centre of industry, the land has since become a rural wilderness.

Two prominent landmarks are Philips Park and cemetery and Brookdale Park. Brookdale Park was formed in 1904 and spans over 44 acres (18 hectares). The park has two bowling greens, tennis courts, and a children's play centre. Philips Park was opened on 22 August 1846 at a cost of £6,200 and was the first public park opened in Manchester. The park, covering 31 acres (12 hectares), was named after Mark Philips MP who was committed to creating parks for the use of the working people of the city.

All Saints church is the oldest remaining structure in the area and can trace its history back to 1556.

Culcheth Hall, which stood alongside the River Medlock in Newton, was owned by the Byron family (of which the poet Lord Byron was a member). Other great houses once lay within the district, including Clayton Hall (owned by the Greaves family), Whitworth Hall and Hulme Hall.

Railways arrived in Newton Heath during the 1840s and the Lancashire & Yorkshire Railway (L&YR) laid two main lines across the district. Steam locomotive repair sheds were opened in 1877 at the Newton Heath Motive Power Depot (now Traction Maintenance Depot), coded 26A by the London, Midland and Scottish Railway. These grew to become a major local employer which, by the 1860s, had been expanded to a 40 acre (16 hectare) site with over 2,000 workers.

Both Newton Heath (closed on 3 January 1966) and Park railway stations (closed on 27 May 1995) were deemed by British Rail to be surplus to requirements following the decline of the local engineering industry.

Newton Heath is served by Newton Heath and Moston Metrolink station. It is located adjacent to the Newton Heath depot, which maintains diesel unit trains for Northern. Metrolink trams have served the area since 2012 using the Manchester-bound platform of the previous Dean Lane railway station. The line was converted from heavy rail to light rail operation as part of the Metrolink expansion project. A £35.6 million Metrolink station was built in 2005 at Central Park south of Newton Heath in anticipation of the network extension, but the project was cancelled by the Government due to funding problems until confirmation of the Metrolink conversion in 2007.

The majority of bus routes are operated by stagecoach manchester. Buses from the city centre include 74, 76, 76A. Bus route 77 offers two early morning journeys from Moston via Newton heath. Bus route 52 from eccles interchange also passes by Newton heath. Other bus routes include 151 171 and 396

The town has several well-known businesses, although a number of companies have since relocated to other areas or disbanded. Princes Food & Drink Group has a soft drinks factory on Grimshaw Lane. Manchester Abattoir, on Riverpark Road, was the primary source of meat produce for the city but has gradually downsized over recent years. The 50,000 sq ft (4,500 m2) central bakery of Martins Bakery is on Holyoak Street.

The town's main shopping area is on Church Street, where alongside small family run stores you can find Iceland, Asda and a Lidl store. The local market, once a local attraction, is now closed after a doomed attempt to upgrade the facilities led to the regular clientele finding other pitches.

Newton Heath Cricket club, which was established in 1859, is located on Mabel Street and affiliated with the Manchester & District and the Lancashire Cricket Associations.

Ten Acres Astro Centre is a council-run sport centre with a full-size outdoor AstroTurf pitch (marked for football and hockey) and an indoor sports hall (marked out for netball, basketball, volleyball, five-a-side football, and badminton).

A speedway training track operated in Newton Heath in the early 1950s.

Notable people of note who were either born and raised in the town include:

The area has produced a number of notable footballers who has distinguished careers in both the national and international game. Jimmy Collinson played for Newton Heath F.C.; George Lydon, Nobby Lawton, Cyril Barlow, Harold Hardman, played for Manchester United; Charlie Harrison played for the Bolton Wanderers; Ron Staniforth, who played in the 1954 World Cup in Switzerland, was born in the town and went on to play 107 games for Sheffield Wednesday. More recently, former Manchester United footballer Ronnie Wallwork and Blackpool F.C. Nathan Eccleston all came from Newton Heath.

Artist John Houghton Hague was a principal member of The (Victorian) Manchester School of Painters in the 1870s.

Former England and Lancashire cricket captain Mike Atherton OBE was born in the town and attended Briscoe Lane school before moving to Failsworth and going on to Manchester Grammar School.

Television talkshow host and journalist Judy Finnigan was born in the parish and raised in the family home on Amos Avenue and also attended Briscoe Lane school.

Buried in Philips Park cemetery is George Stringer. Stringer received a number of awards for valour including the Victoria Cross and the Serbian Milosh Obilich Gold Medal for Bravery, and was Mentioned in Despatches. Born in Newton Heath, he earned his awards at the Battle of Es Sinn during the Mesopotamian campaign of World War I.

All content from Kiddle encyclopedia articles (including the article images and facts) can be freely used under Attribution-ShareAlike license, unless stated otherwise. Cite this article:
Newton Heath Facts for Kids. Kiddle Encyclopedia.