" North Central Florida" is a region of the U.S. state of Florida which comprises the north-central part of the state and encompasses the Gainesville Metropolitan Statistical Area (Alachua and Gilchrist counties), and the North Florida counties of Bradford, Columbia, Hamilton, Lafayette, Madison, Marion, Putnam, Suwannee and Union. The region's largest city is Gainesville, home of the University of Florida, while the largest metropolitan area is the Ocala Metropolitan Area. Other principal cities in the region include Lake City, Live Oak, and Palatka. As of 2010, the region had a population of 873,189. 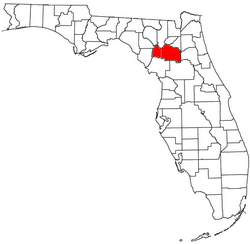 Location of the Gainesville Metropolitan Statistical Area in Florida

Like the Florida Panhandle, this region is often recognized as part of the Deep South, as compared to the rest of the state. The majority of white Americans in North Central Florida are traditionally of relatively unmixed English ancestry.

The region also has large expanses of pine tree forests. The climate is quite mild throughout the year but has very distinct winters with temperatures dropping below freezing quite often.

North Central Florida has a few cities and many small towns or settlements, some of which are along rivers and lakes.

All content from Kiddle encyclopedia articles (including the article images and facts) can be freely used under Attribution-ShareAlike license, unless stated otherwise. Cite this article:
North Central Florida Facts for Kids. Kiddle Encyclopedia.