Radnor Township is one of the oldest municipalities in Pennsylvania. Radnor Township was founded as a part of the Welsh tract. The original settlers were Welsh-speaking Quakers, led by John Roberts, in an attempt to establish an barony of Wales in Pennsylvania. In about 1681, a group of Welsh Quakers met with William Penn to secure a grant of land in which they could conduct their affairs in their own language. The parties agreed on a tract covering 40,000 acres (160 km2), to be constituted as a separate county whose people and government could conduct their affairs in Welsh. William Penn, an English Quaker, laid out the township in an elongated rectangle located parallel to the Schuylkill River, and the borders of the township have remained unchanged since its founding in 1682.

In 1717, the Welsh Friends built a meeting house on a trail made by the Susquehannock Indians in Radnor Township. Radnor Township grew around the meeting house and remained the center of population of the township for 200 years. The new township was named "Radnor" after the county in Wales called Radnorshire. The influence of the Welsh, some of whom were forced by heavy taxation to sell their land, waned in the latter half of the 18th century. A hint of Radnor's beginnings remain in the names of streets and places evident throughout the community, such as the St. Davids neighborhood, named for Saint David, the patron saint of Wales. 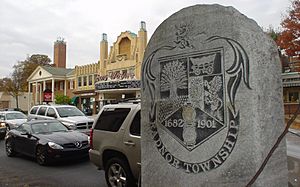 Memorial mile post on U.S. 30 in front of the Anthony Wayne Theater and the AT&T tower in the background.

Radnor Township was founded 1682 as a land grant from William Penn. The township was part of the Welsh Tract and was named for Radnorshire in Wales. In 1717, the Welsh Friends erected a Quaker meetinghouse (Radnor Friends Meetinghouse) near what is now the intersection of Conestoga Road and Sproul Road at the geographic center of the township. The new town, "Radnorville", later known as the community of "Ithan" after nearby Ithan Creek, grew around the meetinghouse. The Welsh influence waned in the late 18th century as many left the area due to high taxation. Stone monuments were erected in various locations throughout the township in the late 20th century to commemorate the township's Welsh heritage. 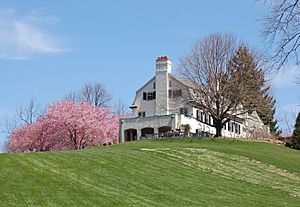 The main house at Chanticleer Garden.

Other historic structures in Radnor Township include the Sorrel Horse, a former tavern located on Conestoga Road that sheltered George Washington and Lafayette during the Continental Army's retreat back to Philadelphia from the Battle of Brandywine.

Lancaster Pike, the first toll road in the United States, connected the cities of Philadelphia and Lancaster, Pennsylvania, passing through Radnor Township, opened in 1794. That road is now part of the Lincoln Highway (U.S. Route 30). The Columbia Railroad, later part of the Pennsylvania Railroad also passed through in 1832. Thus, Radnor is one of the towns associated with the local moniker "Main Line." A separate railroad passing through Radnor Township, the Philadelphia and Western Railroad, was opened in the early 20th century. The "Main Line" railroad facilities and a portion of the P&W facilities are still used by SEPTA (the Philadelphia area's transit authority), and the "Main Line" railroad tracks are owned and used by AMTRAK.

In the 1880s, George W. Childs bought property in the community of Louella in the western part of Radnor Township, renamed the area Wayne, Pennsylvania (after American Revolutionary War hero Anthony Wayne) and organized one of the United States's first suburban developments.

The Radnor Friends Meetinghouse and Woodcrest are listed on the National Register of Historic Places.

The population of Radnor Township in 2010 was 31,531. Of these, about 20,337 (64.5%) were estimated to belong to some form of organized religion. Pennsylvania was unique in its guarantee of religious freedoms, one result of this uncommon freedom was a wide religious diversity, which continues to the present.

Quakerism was brought to Radnor after William Penn granted Welsh settlers land west of Philadelphia to establish the Welsh Tract. The Radnor Friends Meetinghouse was built in 1717. Beginning in the nineteenth century, an influx of Irish, Italian, and Polish immigrants to the Delaware Valley caused the growth of Catholic neighborhoods in Garrett Hill and Villanova. The development of these Catholic communities expanded further with the foundation of Villanova University and Cabrini University.

According to Sperling's BestPlaces, the largest religious group in Radnor Township is the Catholic Church, represented by the Archdiocese of Philadelphia. Almost half of Radnor residents identify as Catholics, and there are more Catholic parishes in Radnor than any other religious group. According to the Archdiocese of Philadelphia, Radnorites are served by five parishes: St. Thomas of Villanova Parish, St. Katharine of Siena Parish, SS. Colman and John Neumann Parish, Our Mother of Good Counsel Parish, and St. Monica Parish.

Places of worship include St. David's Episcopal Church, whose graveyard, and buildings begun in 1715, are listed on the National Register of Historic Places.

Villanova Theatre serves both the university campus community and the Greater Philadelphia area. The Villanova Theatre produces four shows each academic school year presenting a wide range of dramas, comedies, and musicals. Since 1995, the department has received 49 nominations and six Barrymore Awards.

Lincoln Financial Group is headquartered in Radnor Township. In 2007 the company moved 400 employees, including its top executives, to Radnor from Philadelphia. Other companies based in Radnor Township include, J. G. Wentworth, TV Guide magazine and Airgas.

According to Radnor Township's 2013 Comprehensive Annual Financial Report, the top employers in the city are:

The main house at Chanticleer Garden.

Archbishop John Carroll High School, a Roman Catholic High School in the Archdiocese of Philadelphia. Valley Forge Military Academy and College contains a boarding school program for seventh through twelfth grades. The Agnes Irwin School is an all-girls school for prekindergarten through twelfth grade. St. Katharine of Siena is a Catholic school in Wayne for students in kindergarten through eighth grade. The Hill Top Preparatory School is a school located in Ithan for students with learning disabilities in fifth through twelfth grade. Armenian Sisters Academy, an Armenian primary school, has a Radnor postal address but is located in Upper Merion Township.

The Villanova Wildcats have a storied athletic program, the pinnacle of which being their men's basketball program. The Wildcats are consistently ranked among the AP Top 25, and won the NCAA Division I Men's Basketball Tournament in 1985, 2016, and 2018. Each of these championships featured celebrations by students at the intersection of Lancaster and Ithan Avenues.

The Cabrini Cavaliers won their first NCAA Division III Men's Lacrosse Championship in 2019, defeating the Amherst Mammoths by a score of 16–12. 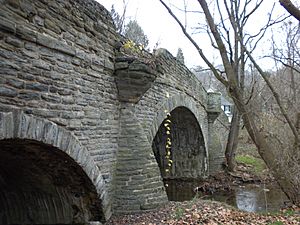 SEPTA Suburban Bus Route 106 bus runs through the center of Radnor Township via Lancaster Avenue, excluding a brief deviation along King of Prussia and Radnor-Chester Roads to service the Norristown High Speed Line's Radnor Station and Paoli/Thorndale Line's Radnor Station. The 106 serves the communities of Rosemont, Villanova, St. Davids, Radnor, and Wayne with westbound access to Paoli and eastbound access to the 69th Street Transportation Center in Upper Darby. The 105 bus formerly drove a route similar to that of the 106, but a 2016 schedule change moved the route's western terminus to Rosemont Station, on Montrose Avenue near the border of Radnor Township and Lower Merion Township. Since 2017, the route runs parallel to Radnor Township's border on Airedale Road, but never enters the township.

The corporate offices of Main Line Health are located in the Radnor Financial Center, as is the Thomas Jefferson University Marcus Institute clinic. In 2020, Penn Medicine opened a hospital next to the Blue Route called Penn Medicine Radnor.

All content from Kiddle encyclopedia articles (including the article images and facts) can be freely used under Attribution-ShareAlike license, unless stated otherwise. Cite this article:
Radnor Township, Delaware County, Pennsylvania Facts for Kids. Kiddle Encyclopedia.