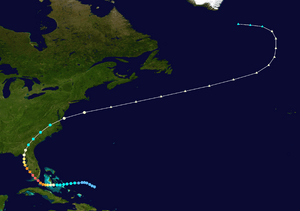 The Labor Day Hurricane of 1935 was the strongest tropical cyclone during the 1935 Atlantic hurricane season. The second tropical cyclone, second hurricane, and second intense hurricane of the season was the most intense Atlantic hurricane that affected the United States, and it remains the first of three Category 5 hurricanes that struck the country. After forming as a weak tropical storm east of the Bahamas on August 29, it slowly proceeded westward, became a hurricane on September 1, and underwent rapid intensification prior to striking the upper Florida Keys on September 2. After landfall at its peak intensity, it continued northwest along the Florida west coast, and it weakened prior to landfall near Cedar Key on September 4.

The large and strong hurricane caused severe damage in the upper Florida Keys, and a storm surge about 18 to 20 feet affected the region. The hurricane's strong winds destroyed most of the buildings in the Islamorada area, and many World War I veteran workers were killed by the storm surge. Portions of the Key West Extension of the Florida East Coast Railroad were severely damaged or destroyed. The hurricane also caused additional damage in northwest Florida, Georgia, and the Carolinas. In total, more than 400 people were killed.

All content from Kiddle encyclopedia articles (including the article images and facts) can be freely used under Attribution-ShareAlike license, unless stated otherwise. Cite this article:
1935 Labor Day Hurricane Facts for Kids. Kiddle Encyclopedia.