The 2011 Virginia earthquake was a magnitude 5.8 (Mw) earthquake in the U.S. state of Virginia on August 23, 2011, at 1:51 PM EDT (17:51 UTC). The focus was 60 kilometres (37 mi) northwest of Richmond and 8 kilometres (5 mi) from the town of Mineral, Virginia. The earthquake was along the Spotsylvania Fault, an ancient fault line that now sits in the middle of the North American plate. Four aftershocks happened within twelve hours of the main earthquake. The aftershocks had magnitudes 2.8, 2.2, 4.2 and 3.4. About 35 hours after the main earthquake, a sixth aftershock of magnitude 4.5 occurred. As of August 30, there have been 19 aftershocks, most of them minor.

There are very few strong earthquakes east of the Rockies in the U.S. This was only the second magnitude 5.8 in the last last 114 years. The other was the 1944 quake on the New York-Ontario border. 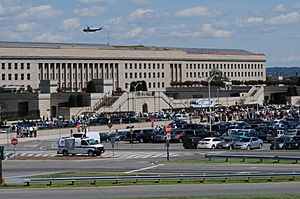 The Pentagon was evacuated moments after a 5.8 earthquake was felt throughout the East Coast of the United States.

Many buildings in the eastern United States are not built strongly enough that earthquakes cannot damage them. In Washington, D.C., the White House, the Capitol building and other buildings were evacuated. In Arlington County, Virginia, a pipe in the Pentagon broke. The pipe flooded two corridors. The Pentagon used an emergency plan put into place after the September 11 attacks to evacuate. Other buildings were evacuated in Philadelphia, Boston and New York City.

Buildings in the Washington, D.C. area were damaged, but not severely. The quake damaged three of the Washington National Cathedral's four pinnacles (corner spires) and cracked some of the Episcopal church's flying buttresses. However, buttresses that support the central tower, a prominent part of the city skyline, look normal. The National Park Service found cracks near the top of the Washington Monument. The monument is closed indefinitely. The earthquake knocked off four of the six spires atop the Washington D.C. Temple of The Church of Jesus Christ of Latter-day Saints. The pieces fell to the ground along with several pieces of marble from the temple's outside wall.

The two nuclear reactors at the North Anna Nuclear Generating Station, 11 miles (18 km) from the epicenter, shut down automatically.

Damage in the northeastern United States was minor. In New York state, Governor Andrew Cuomo said the State Office of Emergency Management had no reports of damage to buildings or infrastructure. There were some disruptions, including building evacuations and delays at airports. Amtrak trains arriving and departing from Penn Station were also delayed.

In New Jersey, the state Emergency Management office reported two gas leaks in Gloucester County, with no reports of injuries from either leak. Buildings such a the Temple B'nai Israel in Burlington and a home in Camden were damaged. Government buildings were evacuated, and city workers could go home.

In Boston, the Massachusetts Emergency Management Agency reported no injuries or damage. The U.S. District Court in South Boston was evacuated and the University of Massachusetts Boston cut summer classes short and sent all workers home early.

In West Virginia, the Kanawha County Courthouse, the West Virginia State Capitol campus, and several other buildings in downtown Charleston were evacuated. Kanawha County dispatchers received more than 350 calls in 45 minutes but there were no reports of damage to buildings and infrastructure other than minor plaster cracking in the old courthouse. Part of a chimney collapsed at the county courthouse in Philippi in Barbour County. The West Virginia Office of Miners' Health Safety and Training stated that West Virginia coal mines were safe following the tremors.

In Delaware, the New Castle County Courthouse in Wilmington and Family Court in Georgetown were evacuated. The press said that blocks fell to the street from the steeple of St. Thomas the Apostle Church. DelDOT crews were sent to all parts of the state to inspect many bridges and roadways including interstate highways and the Indian River Inlet Bridge.

In Pennsylvania, people were told to get out of office buildings in Philadelphia. People were also told to get out of the Bucks County Courthouse in Doylestown. Also, SEPTA Regional Rail trains could only go 25 miles per hour (40 km/h) while tracks were checked for damage and PATCO Speedline trains were also stopped for a short time even though there was no damage. The Pennsylvania Department of Transportation checked bridges for damage. There was no damage to the bridges over the Delaware River owned by the Delaware River Port Authority.

People in eastern Canada also felt the earthquake, mostly in Southern Ontario, as well as parts of Quebec and the Maritimes. A few buildings in Toronto were evacuated. No accidents or damage from the earthquake were reported in Canada.

All content from Kiddle encyclopedia articles (including the article images and facts) can be freely used under Attribution-ShareAlike license, unless stated otherwise. Cite this article:
2011 Virginia earthquake Facts for Kids. Kiddle Encyclopedia.