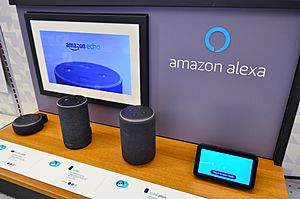 Amazon Alexa on display in a retail store

Amazon Alexa also known as just Alexa is a virtual assistant made by Amazon. It can help users with many tasks, such as basic math, and turning on or off smart lights with Bluetooth. It is similar to Siri and Google Assistant.

Alexa can perform a number of preset functions out-of-the-box such as set timers, share the current weather, create lists, access Wikipedia articles, and many more things.

Users say a designated "wake word" (the default is simply "Alexa") to tell Alexa to listen to a command. Alexa then listens and performs the appropriate function, or skill, to answer a question or command.

Alexa-supported devices can stream music from the owner's Amazon Music accounts and have built-in support for Pandora and Spotify accounts. Alexa can play music from streaming services such as Apple Music and Google Play Music from a phone or tablet.

In addition to performing pre-set functions, Alexa can also perform additional functions through third-party skills that users can enable for example "Sleep and Relaxation Sounds" for listening to calming sounds and "Sesame Street" for children's entertainment.

Alexa can deliver messages to a recipient's Alexa application, as well as to all supported Echo devices associated with their Amazon account. Alexa can send typed messages only from Alexa's app.

The Home Automation feature was launched on April 8, 2015. Developers are able to create their own smart home skills using the Alexa Skills Kit.

In September 2018, Amazon announced a microwave oven that can be paired and controlled with an Echo device. It is sold under Amazon's AmazonBasics label.

Take-out food can be ordered using Alexa; as of May 2017[update] food ordering using Alexa is supported by Domino's Pizza, Grubhub, Pizza Hut, Seamless, and Wingstop. Also, users of Alexa in the UK can order meals via Just Eat.

Severe Weather Alerts were included in February 2020, in which the digital assistant can notify the user when a severe weather warning is issued in that area.

Traffic Updates were included in February 2020, through which Alexa can update the users about their commute, traffic conditions or directions. It can also send the information to the user's phone. 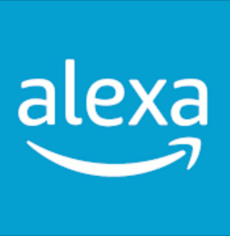 A companion app is available from the Apple Appstore, Google Play, and Amazon Appstore. The app can be used by owners of Alexa-enabled devices to install skills, control music, manage alarms, and view shopping lists. It also allows users to review the recognized text on the app screen and to send feedback to Amazon concerning whether the recognition was good or bad. A web interface is also available to set up compatible devices (e.g., Amazon Echo, Amazon Dot, Amazon Echo Show).

All content from Kiddle encyclopedia articles (including the article images and facts) can be freely used under Attribution-ShareAlike license, unless stated otherwise. Cite this article:
Amazon Alexa Facts for Kids. Kiddle Encyclopedia.