B InTune TV facts for kids

B InTune TV (also known as b intune TV) is an American television series for youth and their music hosted by recording artist Zarah. The show debuted on September 10, 2005 on Viacom/CBS Television Group stations that included UPN and ABC on weekend mornings, broadcasting in 120 million television households in the United States with an international growth of 54 countries worldwide and also airs in NBC, Fox, Comcast, CW, Cox Communications, DirecTV, Dish Network and Time Warner Cable stations.

The series focuses on educating and entertaining teenagers (13 years and older) in a variety of segments, using music as a primary tool to incorporate pop culture in an entertaining behavior. The E/I program features many known stars in the music and entertainment industry which gives both children and their parents the educational value and the inside knowledge in music shown in a unique and enlightening perspective.

The series' idea was initially conceptualized by creator Eugene Maillard who has a long history of Music and Arts Education high-profile projects for children, including an Emmy Award-winning television special From The Heart (also known as The Kennedy Center Honors – A Celebration of the Performing Arts) for mentally challenged and handicapped children, he executive produced with Gary Smith, which starred icons like Michael Douglas, U2 and Pope John Paul II that aired on NBC in 1989.

Mr. Maillard's vision was based on one of its existing B InTune Media properties, InTune Monthly magazine for younger students, which came with a teacher's guide on music-related subjects that circulated throughout 50,000 middle and high schools in the United States. The goal was to bring hipness to the show like an MTV channel however, combined it with leading educational excellence programs like PBS Kids to produce a signature creation for the series that teenage viewers will embrace. With similar interests in educating children and her background as a musician opening in concerts for famous acts like The Goo Goo Dolls, the popular youth series was co-developed by singer-songwriter Zarah who brought 'freshness' to the show and became the host, the co-executive producer and the contributing screenwriter.

The project is to simply use music as the vehicle to impact teenagers commercially and socially along with their celebrities as a form of edutainment in a variety of important segments, led by a relatable host and other teen correspondents, which is filmed from an inside studio located in Hollywood, California as Mr. Maillard refers, we want to be the coolest television show in America.

In July 2005, Mr. Maillard announced a working title for the TV series called; In Tune TV while musician Zarah was set as the host.

The half-hour series begins with its theme song as host Zarah introduces popular musicians and/or celebrities in the entertainment industry with interchangeable segments and occasionally corresponding with teenagers within 22 minutes, to teach 13- to 18-year-olds the basic skills and requirements in life through music but in a fun and entertaining way that meets the Federal Communications Commission (FCC) standard rules and regulations for educational programs. Zarah closes with an original and symbolic motto that was both created by Mr. Maillard and her saying, be in tune, stay in tune at the end of the show, serving as a reminder for all viewers to encourage themselves as well as others, to be more 'in tune' with everything in life.

The series was quickly picked up by Viacom/CBS (own-and-operated) television group among other stations for a (26-episode) weekly show that premiered in September 2005 as B InTune TV. The show reached a 120 million households in over 130 television markets in the United States alone. In addition to its international growth broadcasting in 54 countries which includes Canada, Europe, Asia and others, the E/I-friendly show was supported by InTune Monthly magazine for teenagers and funded in part by the US Department of Education (DOE). 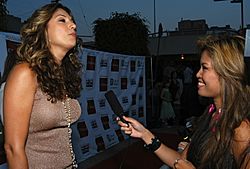 B InTune TV on the scene: TV personality Zarah interviewing Daisy Fuentes at the Hope Rocks event in Hollywood, CA.

This segment focuses on using music as a powerful therapy and its ability to heal. Guest stars discuss the importance of music as they share their own personal life experiences and topics that are often supervised particularly by teenagers.

This segment focuses on going behind the scene interviews as a learning process inside the music industry that covers the reality of a working professional.

This segment focuses on inquiring into one of the most popular genres in music known today. rock and roll history is covered in great length from where it started, the known artists and where it is today.

This segment focuses on teaching teenagers on how to play an instrument, its functionality and purpose. Within a variety of instruments being shown in several times, this segment is particularly helpful to needy teenagers or parents who could not afford a private lesson for their children. 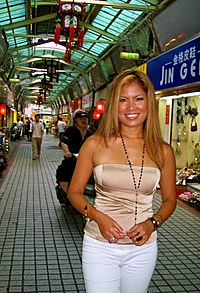 B InTune TV filming on location: Host Zarah at the nearby shops at Snake Alley in Taipei, Taiwan.

This segment focuses on filming on locations and in different parts of the world covering major events in interesting places that are eye-opening experiences.

This segment focuses on an artist or a group purely on inspiring and motivating teenagers by sharing their personal success stories.

This segment focuses on observing and honoring both past and present legendary artists who contributed greatly in music history and the legacy they left behind.

This segment focuses on various artists or bands being followed on the move whether behind the scenes, traveling or on their tour.

The series is originally aired on Viacom/CBS television group and UPN Network stations among others, has broadcast in 120 million households in the United States and followed by 54 countries worldwide since its debut in 2005. On its third season in 2007, the show's popularity brought additional educational and informational (E/I) television specials for B InTune Media and created a separate station lineup for reruns, bringing a global audience of 200 million television households in total.

Due to its growth, the non-sensitive Nielsen ratings and US Federal Communications Commission regulated television series is syndicated by major broadcast television and cable networks including NBC, Fox, Comcast, CW, Cox Communications, DirecTV, Dish Network and Time Warner Cable that reaches over 90 million households in the United States and maintained its broadcast affiliates in 54 countries overseas. To date, the popular youth series has been renewed and running its seventh season.

All content from Kiddle encyclopedia articles (including the article images and facts) can be freely used under Attribution-ShareAlike license, unless stated otherwise. Cite this article:
B InTune TV Facts for Kids. Kiddle Encyclopedia.