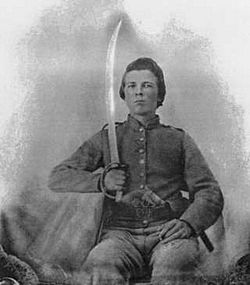 The Confederate States Army (CSA) was organized in February 1861 to defend the newly formed Confederate States of America during the American Civil War. Somewhere between 750,000 and 1.2 million soldiers served the Confederacy in one form or another. The exact numbers are not known because of incomplete and destroyed records. Although it won a large number of battles the Confederate Army was not able to win the war. It could not overcome the Union army's larger numbers and better resources. On April 9, 1865, General Robert E. Lee surrendered what was left of the Army of Northern Virginia to General Ulysses S. Grant at Appomattox Court House, Virginia. While his army was only a part of the total Confederate army, his surrender marked the end of the Confederacy. On June 23, 1865, Georgia's Stand Watie became the last Confederate general to surrender.

Much of the design of the Confederate States Army was based on the structure and customs of the U.S. Army. Both armies consisted mainly of infantry, cavalry and artillery units. While the structure of the two armies was almost the same, the sizes of the units within the army varied. Many Confederate officers were graduates of West Point just like Union officers. Regiments were usually numbered and named for the state where they were first organized and where most of the soldiers came from. Brigades were usually named after their commanders (past or present). For example, the Stonewall Brigade was named for its commanding general, Stonewall Jackson.

Before the Civil War, many Confederate officers had served in the United States Army. When war broke out, 313 army officers resigned and became officers in the Confederate army. Lee was one of those who found it difficult to leave. Abraham Lincoln had offered him the position of commander-in-chief of the Union Army. But he could not fight against his native state of Virginia. He became a Major general of the Virginia militia and when Virginia Seceded, it became part of the regular army. Many militias elected their officers including field officers. When these units joined the Confederate army, their officers were commissioned. There were also a number of professional officers who came from Germany or Britain (just as there were in the Union army). But at the start of the war, few Southern officers had any real experience. Wealthy planters who owned 20 or more slaves were not required to serve in the army and many stayed home during the war. Some served in the Enlisted rank but many found it objectionable to serve under officers so poor they could not afford a single slave. Many Confederate officers kept a slave as a personal servant throughout the war.

Confederate soldiers came from a few ethnic backgrounds. Most of their ancestors came from Scotland, England, Ireland and Wales. Some had ancestors from France and Southern Europe. In regiments such as the 33rd Texas Cavalry, many had Spanish ancestry. Some could even trace their roots back to Spanish Conquistadors. In the Deep South, the Cherokee Nation sent several regiments who fought as equals alongside other Confederate units.

The average Confederate soldier was in his early 20s. He was usually gaunt, unkempt and beards were common. His wool uniform was often torn and in rags. It often did not fit, especially if taken off a dead soldier. Most wore a white shirt under their wool jacket. Replacement uniforms were hard to get. They would often stain homespun (clothing made at home) with a dye made from walnuts. This gave their uniforms a yellowish-brown appearance they called "butternut". Many did not have shoes or shoes that fit. Those who did nailed horseshoes to the bottom to keep them from wearing through the sole. At first he carried a musket or flintlock rifle. Later in the war many carried the better Enfield rifles taken from dead Union soldiers. What the Rebel soldier lacked in supplies and equipment, he made up for in fighting spirit. Any boots, uniforms or supplies Union soldiers left behind or were captured were used by the Confederate soldiers. In camp, most of the tents were marked "U.S." Most of the Southern Artillery was also captured Union cannons.

All content from Kiddle encyclopedia articles (including the article images and facts) can be freely used under Attribution-ShareAlike license, unless stated otherwise. Cite this article:
Confederate States Army Facts for Kids. Kiddle Encyclopedia.