George Frost Kennan (February 16, 1904 – March 17, 2005) was an American diplomat and historian. He was best known as an advocate of a policy of containment of Soviet expansion during the Cold War. He lectured widely and wrote scholarly histories of the relations between the USSR and the United States. He was also one of the group of foreign policy elders known as "The Wise Men".

During the late 1940s, his writings inspired the Truman Doctrine and the U.S. foreign policy of "containing" the Soviet Union. His "Long Telegram" from Moscow during 1946 and the subsequent 1947 article The Sources of Soviet Conduct argued that the Soviet regime was inherently expansionist and that its influence had to be "contained" in areas of vital strategic importance to the United States. These texts provided justification for the Truman administration's new anti-Soviet policy. Kennan played a major role in the development of definitive Cold War programs and institutions, notably the Marshall Plan.

Soon after his concepts had become U.S. policy, Kennan began to criticize the foreign policies that he had helped articulate. By late 1948, Kennan became confident that positive dialogue could commence with the Soviet government. His proposals were discounted by the Truman administration and Kennan's influence was marginalized, particularly after Dean Acheson was appointed Secretary of State in 1949. Soon thereafter, U.S. Cold War strategy assumed a more assertive and militaristic quality, causing Kennan to lament what he believed was an abrogation of his previous assessments.

In 1950, Kennan left the State Department—except for a brief ambassadorial stint in Moscow and a longer one in Yugoslavia—and became a realist critic of U.S. foreign policy. He continued to analyze international affairs as a faculty member of the Institute for Advanced Study from 1956 until his death in 2005 at age 101. 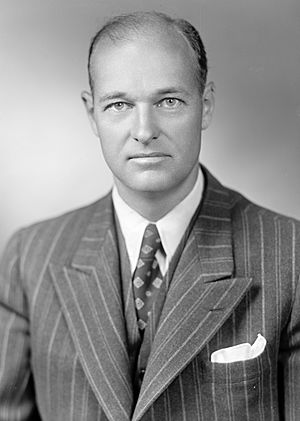 All content from Kiddle encyclopedia articles (including the article images and facts) can be freely used under Attribution-ShareAlike license, unless stated otherwise. Cite this article:
George F. Kennan Facts for Kids. Kiddle Encyclopedia.