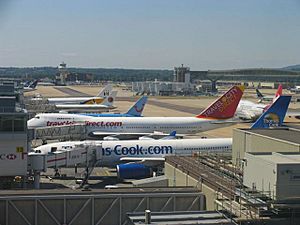 London Gatwick Airport (IATA: LGW, ICAO: EGKK) is London's second largest airport and the second busiest airport in the United Kingdom after Heathrow. It is the world's 22nd busiest airport in terms of passengers per year (7th in terms of international passengers). It is also often quoted as the world's busiest single runway airport, although strictly speaking it now has a second 'stand-by' runway, which can only be used when the main runway is out of use.

Gatwick is owned and operated by a group of companies, led by Global Infrastructure Partners (GIP), after it's previous owner BAA was forced to sell the airport by the Competition Commission due to its dominance in London and the South East, also owning Heathrow Airport.

With about 200 destinations, the airport handled over 34 million passengers with 263,363 aircraft movements in 2006. It was said that during 2007 Gatwick broke through the 35 million barrier for the first time in its history.

Usually, Charter airlines do not operate from Heathrow and therefore use Gatwick as their main base for London and the South East.

For the past 30 years, many flights to and from the USA have also used Gatwick because of the restrictions on access to Heathrow that were enshrined in the 1977 Bermuda II bilateral air services agreement between the UK and the US.

The airport is a major operational base for British Airways, easyJet and Virgin Atlantic. The airport is also a major base for a number of charter airlines including First Choice Airways, Thomas Cook Airlines, Thomsonfly and XL Airways. Runway 8L/26R is mostly used as a taxiway.

London Gatwick has a CAA Public Use Aerodrome Licence (Number P528) that allows flights for the public transport of passengers or for flying instruction.

All content from Kiddle encyclopedia articles (including the article images and facts) can be freely used under Attribution-ShareAlike license, unless stated otherwise. Cite this article:
London Gatwick Airport Facts for Kids. Kiddle Encyclopedia.