Maidenhead is a large town and unparished area in the Royal Borough of Windsor and Maidenhead, in Berkshire, England. It lies south-west of the River Thames , but at Maidenhead, the river runs north-south and so the town is on its west bank. The town has a population of 73,404. Its urban area (including the adjoining suburban villages of Bray, Holyport, Pinkneys Green, Taplow, Cox Green, White Waltham and Woodlands Park) has a population of just under 95,000. 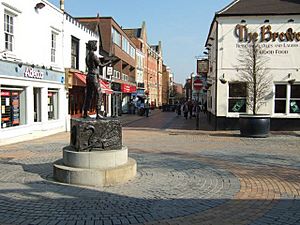 Maidenhead's name stems from the riverside area where the "New wharf" or "Maiden Hythe" was built, perhaps as early as Saxon times. It has been suggested that the nearby Great Hill of Taplow was called the "Mai Dun" by the Iron Age Brythons. The area of the town centre was originally known as "South Ellington" and is recorded in the Domesday Book as Ellington in the hundred of Beynhurst.

In 1280, a bridge was erected across the river to replace a ferry in what was then the hamlet of South Ellington. The Great West Road to Reading, Gloucester and Bristol was diverted over the new bridge. Previously, it had kept to the north bank and crossed the Thames by ford at Cookham, and medieval Maidenhead grew up around it. Within a few years a wharf was constructed next to the bridge and the South Ellington name was dropped with the area becoming known as Maidenhythe (literally meaning "new wharf"). The earliest record of this name change is in the Bray Court manorial rolls of 1296. The bridge led to the growth of Maidenhead: a stopping point for coaches on the journeys between London and Bath and the High Street became populated with inns. The current Maidenhead Bridge, a local landmark, dates from 1777 and was built at a cost of £19,000.

King Charles I met his children for the last time before his execution in 1649 at the Greyhound Inn on the High Street, the site of which is now a branch of the NatWest Bank. A plaque commemorates their meeting.

When the Great Western Railway came to the town, it began to expand. Muddy roads were replaced and public services were installed. The High Street began to change again, and substantial Victorian red brick architecture began to appear throughout the town. Maidenhead became its own entity in 1894, being split from the civil parishes of both Bray and Cookham.

By Edwardian times, nearby Boulter's Lock became a favoured resort, especially on Ascot Sunday, and Skindles Hotel developed a reputation for illicit liaisons. 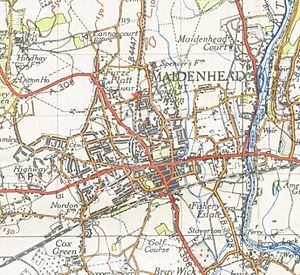 Map of Maidenhead from 1945

The Maidenhead urban area includes urban and suburban regions within the bounds of the town, called Maidenhead Court, North Town, Furze Platt (which in 2012 gained a conservation area), Pinkneys Green, Highway, Tittle Row, Boyn Hill, Fishery and Bray Wick; as well as built-up areas in surrounding civil parishes: Cox Green and Altwood in Cox Green parish, Woodlands Park in White Waltham parish, and part of Bray Wick in Bray parish. Bray village is linked to Maidenhead by the exclusive Fishery Estate which lies on the banks of the Thames. To the east, on the opposite side of the river from Maidenhead, is the large village of Taplow in Buckinghamshire which almost adjoins the suburban village of Burnham, Buckinghamshire, which is in itself part of the urban area of the large, industrial town of Slough. To the north are the Cookhams, Cookham Village, Cookham Rise and Cookham Dean. To the west is the area of Pinkneys Green. These lie south of the Berkshire-Buckinghamshire border, which is formed by the River Thames (which then bends southwards to form the Maidenhead-Taplow border). To the south is the village of Holyport. Continuing by road to the South-East leads to the historic, royal twin towns of Windsor and Eton.

Maidenhead was originally the planned western terminus for the Crossrail line (to and through London) until Reading station, situated 13 miles (21 km) southwest of Maidenhead, was chosen.

Maidenhead lies immediately west of the Taplow ridge; a wooded spur of the Chilterns which rises dramatically above one of the most scenic stretches of the Thames. The ridge is crowned by the spectacular Cliveden House which can be seen from various parts of the town.

The distances between Maidenhead and surrounding towns are as follows:

Maidenhead has a site of Special Scientific Interest (SSSI) in the northern outskirts of the town called Cannoncourt Farm Pit, where the largest hand axe of the paleolithic era in Britain was discovered. 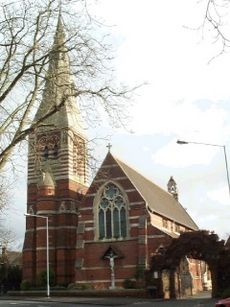 Maidenhead clock tower was built for Queen Victoria's diamond jubilee and is located outside the railway station. 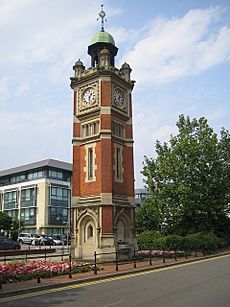 Maidenhead Bridge was built in 1777. It takes the A4 over the Thames to join Maidenhead to Taplow.

All Saints' Church, Boyne Hill was completed in 1857 is one of the finest examples of the early work of the architect G. E. Street. The site is also regarded by many as the premier architectural site in the town. The church, consecrated on 2 December 1857 by Bishop Samuel Wilberforce, became the first ecclesiastical parish in the Borough of Maidenhead.

Boulter's Lock is a lock on the river Thames on the east side of Maidenhead. It adjoins Ray Mill Island.

Although there are attractive residential and green areas in and around Maidenhead, the town centre was heavily redeveloped in the 1970s/ 80s and subsequently has lost much of its traditional English market town character. Research by the New Economics Foundation rated Maidenhead as an example of a clone town and the town centre is regarded as in need of improvement. In December 2007, the Royal Borough of Windsor and Maidenhead set up the Partnership for the Regeneration of Maidenhead (PRoM), which in October 2008 launched a comprehensive 20 Year Vision and Action Plan for rejuvenating the town centre. Launch of the plan coincided with confirmation by central government that Maidenhead will be part of the new Crossrail project. PRoM's plans highlight five key developments which will help shape the town for the future. A large new high rise retail and residential development called 'The Landing' is due for construction shortly, along with an upgraded train station and transport interchange, movement of the football and bowls clubs and linking Kidwells Park into the High Street. The Chapel Arches retail development is currently under way, restoring the old Thames tributaries which run through a historic section of the town centre as an attractive feature and amenity in the town. New apartments, boutique stores and restaurants, bars, and cafes are to be a feature of this new waterfront quarter of the town centre.

Maidenhead was home to the conference that agreed on the Maidenhead Locator System standard in 1980. It is located in grid square ​IO91pm. 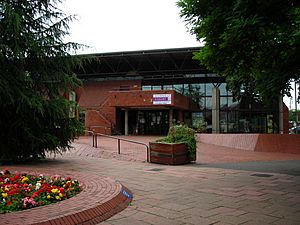 Maidenhead offers High Street shopping facilities including Nicholson's Centre, a shopping centre on the site of Nicholson's brewery. The town also offers an eight-screen Odeon multiplex cinema, a leisure centre (with swimming pool), called the Magnet, and a bowling alley. Help with shopping in the town centre can be provided by the Shopmobility service on the ground floor of Nicholson's car park.

Maidenhead Heritage Centre and Museum was established in 1993 and moved to permanent premises in a former pub in Park Street in 2006.

In the Boyne Hill area there is Norden Farm Centre for the Arts (an arts centre including a theatre).

Waltham Place Estate on Church Hill includes an ornamental garden integrated within a 200-acre (80 ha) organic and biodynamic farm estate. It is promoted by the Campaign to Protect Rural England.

The Reitlinger Open Space on Guards Club Road is named after Henry Reitlinger, a leading collector of fine art. On his death in 1950, the collection was vested in a trust, the Henry Reitlinger Bequest. The trustees were his adopted daughter, Mrs. M. Cocke, and a Maidenhead solicitor, who chose to house the collection at Oldfield House, now a private residence; the building dates back to 1892. 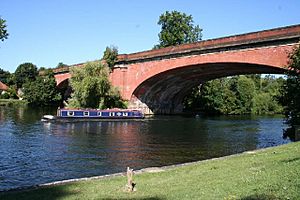 The (Brunel-built) Great Western Main Line passes through the town, calling at Maidenhead railway station and offering links to London, Reading and Oxford. It passes over Brunel's Maidenhead Railway Bridge (known locally as the Sounding Arch), famous for its flat brick arches. Maidenhead Station is the beginning of the Marlow Branch Line from Maidenhead to Marlow, Buckinghamshire, Furze Platt railway station on this branch also serves the northern area of Maidenhead. Rail services have been provided by Great Western since 2003-04. From December 2019 the station will form part of the western section of the Elizabeth Line (Crossrail). 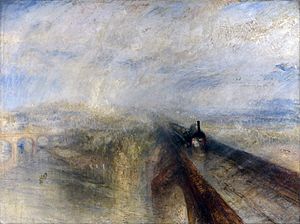 Local bus services are provided by First Berkshire & The Thames Valley, Arriva the Shires and Essex and Courtney Coaches.

The A4 runs through the town and crosses the Thames over Maidenhead Bridge. The town lies adjacent to junction 8/9 on the M4 motorway (accessed via the A404(M) and A308(M)). The M4 and M40 are linked by the A404(M)/ A404 which skirts the western side of Maidenhead.

The River Thames runs 1⁄2 mile (800 m) to the east of the town centre, and York Stream, which runs through the town centre, connects to the Thames via a system of disused waterways. A renewal scheme is in progress (October 2007) to reopen these waterways. The Jubilee River, part of the flood defence scheme, begins above Boulter's Lock nearby.

Maidenhead is in England's Silicon Corridor along the M4 motorway west of London. Many residents commute to work in London, or to the towns of Slough and Reading.

Maidenhead is twinned with:

Each year youths from the four towns and Berlin-Steglitz (twinned with Bad Godesberg) compete against one another in sports such as volleyball, football, athletics and swimming in the Twin Towns Sports Competition, hosted in turn by each of the five towns. In Maidenhead town centre there are roads named after three of the twin towns (Bad Godesberg Way, Frascati Way and St Cloud Way). Local schools often participate in student exchanges with pupils being exchanged between schools within the twinned towns.

All content from Kiddle encyclopedia articles (including the article images and facts) can be freely used under Attribution-ShareAlike license, unless stated otherwise. Cite this article:
Maidenhead Facts for Kids. Kiddle Encyclopedia.