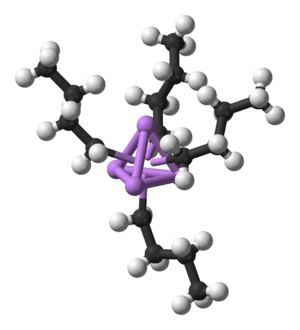 n-Butyllithium, an organometallic compound. Four lithium atoms are shown in purple in a tetrahedron, and each lithium atom is bound to a butyl group (carbon is black, hydrogen is white) 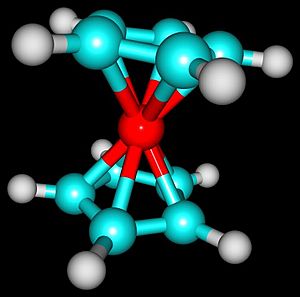 The term "metalorganics" usually refers to metal-containing compounds lacking direct metal-carbon bonds but which contain organic ligands which bind them to an organic compound. Metal beta-diketonates, alkoxides, and dialkylamides are members of this class.

In addition to the traditional metals, elements such as boron, silicon, arsenic, and selenium form organometallic compounds. 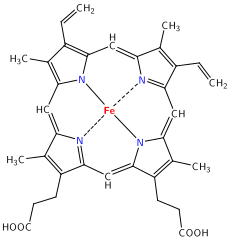 Many organic coordination compounds occur in nature. For example, hemoglobin and myoglobin contain an iron center coordinated to the nitrogen atoms of a porphyrin ring; magnesium is the center of a chlorin ring in chlorophyll. The field of such inorganic compounds is known as bioinorganic chemistry. However, methylcobalamin (a form of Vitamin B12), with a cobalt-methyl bond, is a true organometallic complex, one of the few known in biology.

Organometallics find practical uses in stoichiometric and catalytic processes, especially processes involving carbon monoxide and alkene-derived polymers. All the world's polyethylene and polypropylene are produced with organometallic catalysts. Acetic acid is produced using metal carbonyl catalysts in the Monsanto process and Cativa process. The bulk of the synthetic alcohols, at least those larger than ethanol, are produced by hydrogenation of hydroformylation-derived aldehydes. Similarly, the Wacker process is used in the oxidation of ethylene to acetaldehyde.

Organomettalic are highly basic and highly reducing. They catalyze many polymerization reactions. They are also useful stoichiometrically.

Organometallic compounds may be found in the environment. Environmentalists worry about organo-lead and organo-mercury compounds. They are toxic hazards.

Research is currently underway using organometallic catalysis. The energy crisis has initiated increased interest in more efficient ways of working with the remaining fossil fuels we have left. While many agree that lowering oil dependence is safer for the environment as well as politically wise. The new interest in “green” technologies has also helped increase research. Many examples of organometallic research can be found in the petrochemical and pharmaceutical industries. Some current methods of chemical production are wasteful and produce toxic waste, while many organometallic catalysts show promise to change that.

Years ago, Tetraethyllead was added to gasoline as an antiknock agent. Because lead is toxic, it is no longer used in gasoline. Instead, other organometallic compounds such as ferrocene and methylcyclopentadienyl manganese tricarbonyl (MMT) are now added to gasoline to prevent knocking.

All content from Kiddle encyclopedia articles (including the article images and facts) can be freely used under Attribution-ShareAlike license, unless stated otherwise. Cite this article:
Organometallic chemistry Facts for Kids. Kiddle Encyclopedia.