Middletown is a bedroom community of New York City, located alongside of the Raritan Bay within the Raritan Valley region in the New York metropolitan area. Due to its affluence, low crime, access to cultural activities, public school system, proximity to the Jersey Shore and Raritan Bayshore, and central commuting location, Middletown was ranked in 2006, 2008, 2010, and 2014 in the Top 100 in CNNMoney.com's Best Places to Live. Time magazine listed Middletown on its list of "Best Places to Live 2014".

In 2016, SafeWise named Middletown Township as the fifth-safest city in America to raise a child; the township was the highest ranked of the 12 communities in New Jersey included on the list.

Small communities of the Lenape Navesink tribe were common throughout the area when the first known European landing in what would become Middletown Township occurred in 1609. Sea captain and explorer Henry Hudson, in search of the mythical Northwest Passage in the service of the Dutch West India Company, anchored along the shores of Sandy Hook Bay in 1609, describing the area "a very good land to fall in with and a pleasant land to see." While a patroonship was granted by the company in 1651 the land wasn't officially settled. Today's Shoal Harbor Museum and Old Spy House includes portions of a house constructed by Thomas Whitlock, one of the area's first European settlers (and a Reformed Baptist at Middletown) who arrived here as early as 1664, before the English conquest of New Netherland began in 1665 as part of the Second Anglo-Dutch War. Long-standing tradition had Penelope Stout, one of the first settlers, hiding in a tree from hostile Native Americans.

Shortly after the Dutch surrender of the New Netherland to the English in 1664 a large tract of land known as the Navesink Patent or Monmouth Tract was granted to Baptist and Quaker settlers from Long Island, Rhode Island and Massachusetts, which soon thereafter became the townships of Middletown and Shrewsbury.

During the American Revolutionary War, Middletown and much of the rest of Eastern Monmouth County was held by the British. After the Battle of Monmouth, the British retreat from Freehold Township, New Jersey carried them down King's Highway in Middletown to their embarkation points at Sandy Hook in the bay, heading back to New York City.

Upon the completion of a railroad junction in 1875, the town grew more rapidly, eventually changing from a group of small and loosely connected fishing and agricultural villages into a fast-growing suburb at the turn of the 20th century. If Middletown ever had a recognizable town center or town square, it was lost in that rapid growth soon after World War II.

In May 1958, several Nike Ajax missiles exploded at Battery NY-53 in Chapel Hill, killing ten Army and civilian personnel. The accident was one of the worst missile-related disasters of the Cold War.

The Waterfront site of Naval Weapons Station Earle is located in Leonardo on Sandy Hook Bay, and is used to load ammunition onto ships on a finger pier that stretches for 2.9 miles (4.7 km), making it the world's second-longest such pier.

The "Evil Clown of Middletown" is a towering sign along Route 35 painted to resemble a circus clown, that currently advertises a liquor store. The sign is a remnant of an old supermarket that used to be at that location called "Food Circus". The clown and recent successful attempts from residents to save it from demolition have been featured in the pages of Weird NJ magazine, on The Tonight Show with Jay Leno, and in the Kevin Smith-directed film Clerks II.

The Indian Trails 15K road race is held each year in April to benefit the Monmouth Conservation Foundation and includes a 5K walk/run event for fun. The race, run on a combination on paved and dirt roads, includes many relatively steep hills and has been described as "the most challenging race in the state". 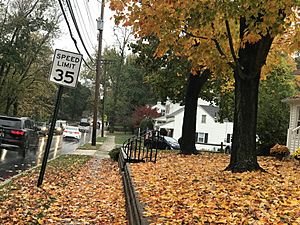 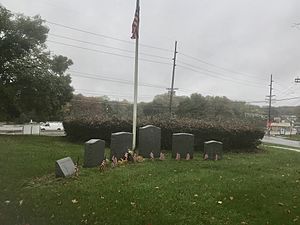 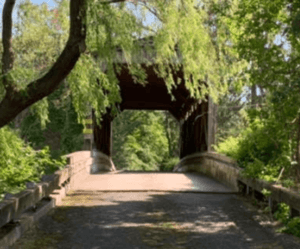 One of the few remaining Covered Bridges in the state.

Middletown has some of the largest emergency service departments in the area. The police and fire departments celebrated a joint 75th Anniversary in 2003. As of November 2016, Middletown Township switched their radio system over to county dispatch as part of an effort to save an estimated $1 million per year by eliminating 15 dispatchers.

Fire companies, in order of creation, are as follows:

For a time these companies acted separately until August 28, 1928, when all the individual companies were brought together to form the current fire department. Since then, two more companies have been formed:

There are other special units besides the main fire companies. The MTFD has its own Fire Police Unit, Air Unit, and Special Services Unit (SSU).

There are five squads that make up the Township of Middletown EMS Department (EMS) and provide Basic Life Support (BLS) ambulances to the township. They are:

They are all volunteer as well. All except Port Monmouth have EMS rescue trucks with equipment to handle vehicle extrications and rope rescue. These squads also have boats and dive teams to perform rescue and recovery operations involving water which have been called out of town to assist with large area searches. Port Monmouth provides a bariatric unit, a converted ambulance, for severely overweight patients. It has been requested outside of Middletown Township as a back-up for MONOC's unit.

Advanced Life Support (ALS) or paramedics for the township and surrounding towns are provided by MONOC. The two primary paramedic units for Middletown Township are Medic 206 located at MTFD Station 8 (Middletown Fire Company No. 1) covering a majority of the town and Medic 201 located at South Aberdeen First Aid Squad in Aberdeen covering the Northwestern end of town. Other medic units from farther distances are dispatched when these are not available. 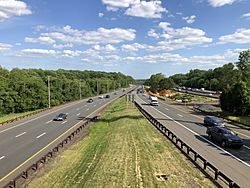 The Garden State Parkway in Middletown

The Garden State Parkway is the largest and busiest highway which passes through the township, connecting Tinton Falls in the south to Holmdel Township in the north. The township includes Parkway interchange 109 which is signed for County Route 520 to Red Bank / Lincroft and interchange 114 for Holmdel / Middletown. There are three toll gates on the Parkway located in Middletown, two of them are at Exit 109 (northbound entry, southbound exit), and two at Exit 114 (northbound entry, with the southbound toll exit in Holmdel). Routes 35 and 36 pass through Middletown.

CR. 516 travels through the northern part of the township and its eastern end is at Route 36 near Leonardo, while its western end is at Route 18 in Old Bridge. CR. 520 passes through the southern portion of Middletown, and leads to Sea Bright to the east, and turns into CR. 612 in Monroe Township to the west, making it a vital route for central New Jersey, by connecting sections of the state near the shore to inland sections of the state near the New Jersey Turnpike at Exit 8A. 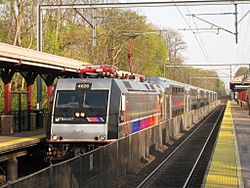 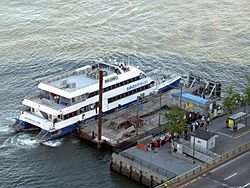 Ferry service to and from New York City is available through the NY Waterway. The ferry slip is located in the neighborhood of Belford and is utilized by many Middletown residents for commuting to New York City. The roughly 50 minute trip on the ferry to West Midtown Ferry Terminal travels across the Lower New York Bay to enter Lower New York Harbor at The Narrows.

SeaStreak is another local ferry service, with its ferry slip in neighboring Highlands. SeaStreak offers ferry service to and from New York City with trips to Pier 11 (on the East River at Wall Street) and East 35th Street in Manhattan. The ferry service also offers seasonal travel, such as to the public beaches on Sandy Hook, baseball games at Yankee Stadium and Citi Field, trips to Broadway matinees, Martha's Vineyard in Massachusetts, college football games at West Point, fall foliage in the Hudson Valley, and to the Macy's Thanksgiving Day Parade, among other excursions.

Middletown also hosts two public magnet schools, High Technology High School, on the property of Brookdale Community College, located in the Lincroft section of town, and the Marine Academy of Science and Technology located on Sandy Hook, which are part of the Monmouth County Vocational School District.

Middletown Township is home to two private high schools. Christian Brothers Academy is an all-boys College preparatory school with a focus on Christian education run by the Institute of the Brothers of the Christian Schools, located in Lincroft. Mater Dei High School is a four-year Catholic coeducational high school located in the New Monmouth section and operates under the supervision of the Roman Catholic Diocese of Trenton.

Saint Mary School (for PreK-8, founded in 1953) in New Monmouth and Saint Leo the Great School (a National Blue Ribbon School founded in 1960) in Lincroft both operate as part of the Roman Catholic Diocese of Trenton. Oak Hill Academy is an independent school for PreK-8 in Lincroft, that was founded in 1981.

People who were born in, are residents of, or otherwise closely associated with Middletown Township include:

All content from Kiddle encyclopedia articles (including the article images and facts) can be freely used under Attribution-ShareAlike license, unless stated otherwise. Cite this article:
Middletown Township, New Jersey Facts for Kids. Kiddle Encyclopedia.