Wildlife of Alaska facts for kids

The wildlife of Alaska is both diverse and abundant. The Alaskan Peninsula provides an important habitat for fish, mammals, reptiles, and birds. At the top of the food chain are the bears. Alaska contains about 70% of the total North American brown bear population and the majority of the grizzly bears. as well as black bears and Kodiak bears. In winter, polar bears can be found in the Kuskokwim Delta, St. Matthew Island, and at the southernmost portion of St. Lawrence Island. There are also moose and caribou, bison, wolves and wolverines, foxes, otters and beavers. Fish species are extensive, including: salmon, graylings, char, rainbow and lake trout, northern pike, halibut, pollock, and burbot. The bird population consists of hundreds of species, including: bald eagles, owls, falcons, ravens, ducks, geese, swans, and the passerines. Sea lions, seals, sea otters, and migratory whales are often found close to shore and in offshore waters. The Alaskan waters are home to two species of turtles, the leatherback sea turtle and the green sea turtle. Alaska has two species of frogs, the Columbia spotted frog and wood frog, plus two introduced species, the Pacific tree frog and the red-legged frog. The only species of toad in Alaska is the western toad. There are over 3,000 recorded species of marine macroinvertebrates inhabiting the marine waters, the most common being the various species of shrimp, crab, lobster, and sponge. 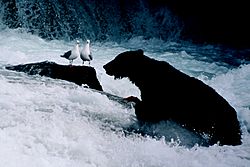 Alaska contains about 98% of the U.S. brown bear population and 70% of the total North American population. An estimated 30,000 brown bears live in Alaska. Of that number, about 1,450 are harvested by hunters yearly.

Brown bears can be dangerous if they are not treated with respect. Between the years 1998 and 2002, there were an average of 14.6 brown bear attacks per year in the state. Brown bears are most dangerous when they have just made a fresh kill, and when a sow has cubs.

The black bear is much smaller than the brown bear. They are found in larger numbers on the mainland of Alaska, but are not found on the islands off of the Gulf of Alaska and the Seward Peninsula. Black bears have been seen in Alaska in a few different shades of colors such as black, brown, cinnamon, and even a rare blue shade. They are widely scattered over Alaska, and pose more of a problem to humans because they come in close contact with them on a regular basis. They are considered a nuisance because they frequently stroll through local towns, camps, backyards, and streets because of their curiosity and easy food sources such as garbage. While black bear attacks are exceedingly rare, they can pose a risk to public safety when food conditioned and habituated to humans due to an availability of human food sources. As many as 100,000 black bears live in Alaska. 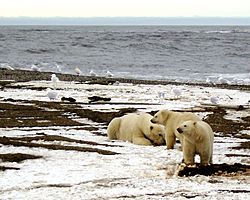 Alaska's polar bear populations are concentrated along its Arctic coastlines. In the winter, they are most common in the Kuskokwim Delta, St. Matthew Island, and at the southernmost portion of St. Lawrence Island. During the summer months, they migrate to the coastlines of the Arctic Ocean and the Chukchi Sea. There are two main polar bear populations in Alaska. The Chukchi population is found off in the western part of Alaska near the Wrangell Islands, and the Beaufort Sea population is located near Alaska’s North Slope.

Until the late 1940s, polar bears were hunted almost exclusively for subsistence by Inupiats and dogs teams, though from the late 1940s until 1972, sport hunting by others took place. The 1959 Statehood Act set up a program for polar bear management, and further conservation efforts, including the 1972 Marine Mammal Protection Act, have limited polar bear hunts. Polar bear populations may be threatened by oil development and global warming. Only about 4700 polar bears are known to inhabit Alaska. 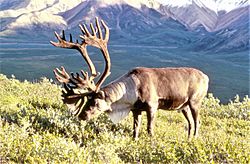 Caribou on the Alaska tundra.

Alaska is home to the Rangifer tarandus granti subspecies of caribou. While other parts of the world use the terms "caribou" and "reindeer" synonymously, in Alaska "reindeer" refers exclusively to domesticated caribou. Caribou in Alaska generally are found in tundra and mountain regions, where there are few trees. However, many herds spend the winter months in the boreal forest areas.

Caribou are large-scale migratory animals and have been known to travel up to 50 miles (80 km) a day. The migratory activities of caribou are usually driven by weather conditions and food availability. Changes in caribou migration can be problematic for Alaska Natives, who depend on caribou for food.

Caribou in Alaska are abundant; currently there are an estimated 950,000 in the state. The populations of caribou are controlled by predators and hunters (who shoot about 22,000 caribou a year). Though in the 1970s there were worries that oil drilling and development in Alaska would harm caribou populations, they seem to have adapted to the presence of humans, and so far there have been few adverse effects. 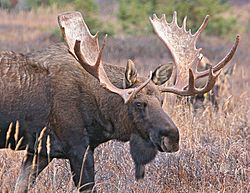 The Alaskan subspecies of moose (Alces alces gigas) is the largest in the world; adult males weigh 1,200 to 1,600 pounds (542–725 kg), and adult females weigh 800 to 1,300 pounds (364–591 kg) Alaska's substantial moose population is controlled by predators such as bears and wolves, which prey mainly on vulnerable calves, as well as by hunters.

Because of the abundance of moose in Alaska, moose-human interactions are frequent. Moose have played an important role in the state's history; professional hunters once supplied moose meat to feed mining camps. Athabascan people have hunted them to provide food as well as supplies for clothing and tools. They are now hunted frequently by big game hunters, who take 6,000 to 8,000 moose per year. Today, moose are often seen feeding and grazing along the state's highways. Moose can sometimes cause problems, as when they eat crops, stand in the middle of airfields, or dangerously cross the path of cars and trains. Moose are also a very popular icon in Alaska.

Mountain goats are found in the rough and rocky mountain regions of Alaska, throughout the southeastern Panhandle and along the Coastal Mountains of the Cook Inlet. Populations are generally confined in the areas of the Chugach and Wrangell Mountains. Mountain goats have been transplanted to the islands of Baranof and Kodiak, where they have maintained a steady population. The mountain goat is the only representation in North America of the goat-like ungulates. Very little was known about mountain goats up until 1900. They constantly migrate to different areas from the alpine ridges in the summer, and to the tree-line in the winter.

The ancestors of the American bison (Bison bison) now in Alaska were transplanted from Montana in 1928, when 20 animals were imported by the Alaska Game Commission and released in the area of what is now Delta Junction. Additional herds have developed along the Copper River, Chitina River, and near Farewell from natural emigration and transplant. Small domesticated herds have also been established near Kodiak and Delta Junction, as well as on Popov Island.

Another sub-species of bison, the wood bison (b. b. athabascae) was once Alaska’s most common large land mammal. The combined effects of pre-contact habitat change and human harvest were probably responsible for their disappearance. The last reported sighting of wood bison in Alaska was in the early 1900s. Oral history accounts from Alaska Native elders suggest that these bison were a resource for indigenous peoples in Alaska as recently as 200 years ago.

In 2003, there were approximately 900 wild American bison in Alaska. Their numbers are controlled by managed sport hunting, as predation is not common. Bison can occasionally be seen on their summer range from the Richardson Highway south of Delta Junction, on the Delta Junction Bison range and on the Delta Agricultural Project. The Alaska Department of Fish and Game is currently reviewing plans to reintroduce wood bison to Alaska from Canada. 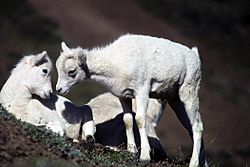 Dall sheep live in the mountain regions of Alaska where there is rocky terrain and steep, inclined land. The mountain setting is an ideal place for them to rest and feed. They are occasionally seen below their usual high elevation only when food is scarce. Alaska contains a good size population of dall sheep. In their rocky environment, they are able to avoid predators and human activities.

The orca is known as the killer whale (although they are dolphins not whales) because of the way in which it hunts in large groups. The hunting style has often been compared to that of wolves. Another reason is their tendencies to eat other whales and large prey animals such as seals and sea lions. Orcas are scattered among the Continental Shelf from southeast Alaska through the Aleutian Islands. They can also be seen in the waters of Prince William Sound.

Alaska has quite a variety of fish species. Its lakes, rivers, and oceans are home to fish such as trout, salmon, char, grayling, halibut, lampreys, lingcod, longnose sucker, pacific hake, pacific herring, pike, black rockfish, salmon shark, sculpin, walleye pollock, white sturgeon, and whitefish. Every year, the salmon participate in the great spawning migration up against the river currents. They do this in large numbers and are frequently seen jumping out of the water. This is a physical effort of them trying to go against the current. Bears, particularly brown bears, take advantage of this event by swarming to the rivers, and indulging in the salmon feast. Bear Lake, near Seward on the Kenai Peninsula, has been the site of salmon enhancement activities since 1962. 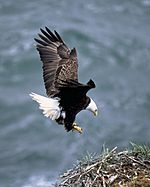 Hundreds of species of birds inhabit Alaska, especially in coastal regions. Some of the more notable birds in Alaska include:

All content from Kiddle encyclopedia articles (including the article images and facts) can be freely used under Attribution-ShareAlike license, unless stated otherwise. Cite this article:
Wildlife of Alaska Facts for Kids. Kiddle Encyclopedia.