Burials and memorials in Westminster Abbey facts for kids

Honouring individuals with burials and memorials in Westminster Abbey has a long tradition. 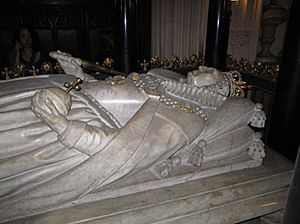 Tomb effigy of Queen Elizabeth I

Henry III rebuilt Westminster Abbey in honour of the Royal Saint Edward the Confessor whose relics were placed in a shrine in the sanctuary and now lie in a burial vault beneath the 1268 Cosmati mosaic pavement, in front of the High Altar. Henry III himself was interred nearby in a superb chest tomb with effigial monument. Many of the Plantagenet kings of England, their wives and other relatives, were also buried in the Abbey. From the time of Edward the Confessor until the death of George II in 1760, most Kings and Queens of England were buried here, although there are exceptions (most notably Edward IV, Henry VIII and Charles I who are buried in St George's Chapel, Windsor Castle). All monarchs who died after George II were buried in Windsor; most were laid to rest in St George's Chapel, although Queen Victoria and Edward VIII are buried at Frogmore, where the Royal Family also has a private cemetery.

Since the Middle Ages, aristocrats were buried inside chapels, while monks and other people associated with the Abbey were buried in the Cloisters and other areas. One of these was Geoffrey Chaucer, who was buried here as he had apartments in the Abbey where he was employed as master of the King's Works. Other poets, writers and musicians were buried or memorialised around Chaucer in what became known as Poets' Corner. These include: W. H. Auden, William Blake, Robert Burns, Lord Byron, Charles Dickens, John Dryden, George Eliot, T. S. Eliot, Thomas Gray, Gerard Manley Hopkins, Samuel Johnson, John Keats, Rudyard Kipling, Jenny Lind, John Masefield, John Milton, Laurence Olivier, Alexander Pope, Nicholas Rowe, Percy Bysshe Shelley, Thomas Shadwell, Alfred, Lord Tennyson and William Wordsworth. Abbey musicians such as Henry Purcell were also buried in their place of work.

Subsequently, it became one of Britain's most significant honours to be buried or commemorated here. The practice of burying national figures in the Abbey began under Oliver Cromwell with the burial of Admiral Robert Blake in 1657. The practice spread to include generals, admirals, politicians, doctors and scientists such as Isaac Newton, buried on 4 April 1727 and Charles Darwin, buried 19 April 1882.

During the early 20th century, for reasons of space, it became increasingly common to bury cremated remains rather than coffins. In 1905 the actor Sir Henry Irving was cremated and his ashes buried in the Abbey, thereby becoming the first person ever to be cremated prior to interment. This marked a milestone as after the death of Sir Joseph Hooker in December 1911, the Dean and Chapter of Westminster Abbey chose to offer Hooker a grave near Charles Darwin's in the nave but also insisted that he be cremated before. His widow however declined and so Hooker's body was buried in the churchyard of St Anne's Church, Kew. The majority of interments at the Abbey are of cremated remains, but some burials still take place – Frances Challen, wife of the Rev Sebastian Charles, Canon of Westminster, was buried alongside her husband in the south choir aisle in 2014. Members of the Percy family have a family vault, "The Northumberland Vault", in St Nicholas's chapel, within the Abbey. The ashes of physicist Stephen Hawking were interred in the Abbey on 15 June 2018, near the grave of Sir Isaac Newton. The memorial stone, bearing the inscription 'Here lies what was mortal of Stephen Hawking 1942–2018', includes a form of the Bekenstein–Hawking entropy equation relating to black holes.

In the floor just inside the great west door, in the centre of the nave, is the tomb of The Unknown Warrior, an unidentified British soldier killed on a European battlefield during the First World War. He was buried in the Abbey on 11 November 1920. There are many graves in the floors of the Abbey, but this is the only grave on which it is forbidden to walk.

The following English, Scottish and British monarchs and their consorts are buried in the Abbey: 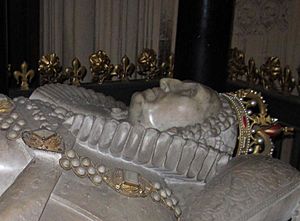 Elizabeth I of England as shown on her tomb

In the 19th century researchers looking for the tomb of James I partially opened the underground vault containing the remains of Elizabeth I and Mary I of England. The lead coffins were stacked, with Elizabeth's resting on top of her half-sister's.

The position of the tomb of James I of England was lost for two and a half centuries. In the 19th century, following an excavation of many of the vaults beneath the floor, the lead coffin was found in the Henry VII vault.

Other monarchs and royals

The following are buried in the nave:

The following are buried in the North Transept: 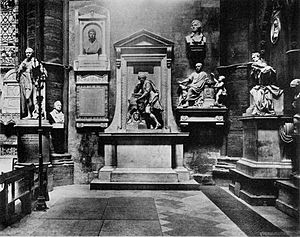 The following are buried in the South Transept which is known as Poets' Corner: 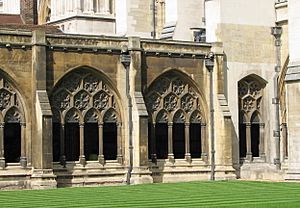 The cloister and garth

The following are buried in the cloisters:

The following are buried in the North Choir Aisle:

The following are buried in the South Choir Aisle:

The following are buried in the ambulatory chapels:

The following are buried in Henry VII's Chapel:

The following are commemorated in the Abbey and/or had their Memorial Service in the Abbey, but were buried elsewhere:

Above the Great West Door, ten 20th-century Christian martyrs from across the world are depicted in statues; from left to right:

King Harold I was originally buried in the Abbey, but his body was exhumed and thrown into a fen in June 1040. The body was later rescued and re-buried in the church of St Clement Danes in Westminster.

A number of Cromwellians were also buried in the Abbey but later removed, in 1661, on the orders of King Charles II, and buried in a pit in St Margaret's churchyard, adjoining the Abbey. A modern plaque on the exterior wall of the church records the names of those who were disinterred:

In November 1869, at the request of the Dean of Westminster and with the approval of Queen Victoria, the philanthropist George Peabody was given a temporary burial in the Abbey, but later moved and buried in Salem, Massachusetts.

All content from Kiddle encyclopedia articles (including the article images and facts) can be freely used under Attribution-ShareAlike license, unless stated otherwise. Cite this article:
Burials and memorials in Westminster Abbey Facts for Kids. Kiddle Encyclopedia.