Collingwood is a former town in the Channel Country in Central West Queensland, Australia, in the Shire of Winton. Collingwood was founded in the 1870s, and it was hoped that the town would thrive and grow into a regional centre that would foster the development of pastoral activity in the Diamantina region, an industry of great local importance to this day. However, Collingwood ultimately failed as a town and was given up after only about two decades of existence. 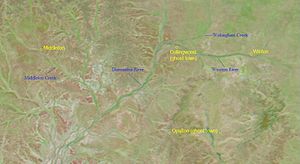 In this satellite view of the Collingwood area, flooding in January 2010 has greened the land, especially near the rivers. This colouring, however, is exaggerated somewhat by NASA’s use of both visible and infrared light in this detail of an Earth Observatory image. Collingwood and several other places and features have been added to the image (an unmarked version is available at the Commons link, along with the full version from which this detail was drawn). 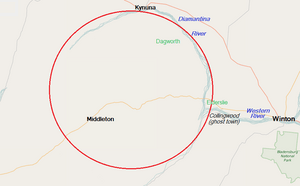 A map showing the rough extent of the crustal anomaly that may be an ancient impact structure.

Collingwood also lay in the Great Artesian Basin. Nevertheless, there does not seem to be any record of an artesian bore ever being attempted at Collingwood, as was done in many other places in Outback Queensland, even locally (as at Dagworth, 65 km to the northwest, in the 1890s) often with great success. Geologically, the site lies in the Eromanga Basin. More locally, the geology consists of the Cretaceous Winton Formation, and it was at Manfred Station (23°04′00″S 143°58′00″E﻿ / ﻿23.066669464°S 143.966674804°E﻿ / -23.066669464; 143.966674804), 168 km from Collingwood’s former site, where the formation yielded up at least two palaeobotanical fossils to a J. Williams in 1920. More recently, in 2005, Australovenator and Diamantinasaurus matildae Early Cretaceous dinosaur remains were unearthed by palaeontologists at the "Matilda site" not far north of the former town, on Elderslie Station (site’s position roughly 22°12′S 142°30′E﻿ / ﻿22.2°S 142.5°E﻿ / -22.2; 142.5). A "major fault" passes just southeast of the Collingwood site, called the Cork Fault. It runs roughly northeast to southwest. Its downthrow is to the northwest, towards Collingwood. Seismic studies along this fault began in 1960 with the Bureau of Mineral Resources (now Geoscience Australia). In the years that followed, a number of other surveys were conducted by private companies, among which was the Western River Seismic Survey in 1967 by the United Geophysical Corporation, which was "aimed at further defining the Permo-Triassic section on the downthrown (west) side of the Cork Fault indicated by the previous Collingwood survey (Phillips, 1966)." This information is all held in a report that also mentions petroleum exploration in the area, with one exploratory well sunk about 20 km north of the former townsite, at Lovelle Downs (22°09′S 142°32′E﻿ / ﻿22.15°S 142.53°E﻿ / -22.15; 142.53). Drilling was underway late in 1972 by Hematite Petroleum. The Cork Fault might have begun as long ago as the Mesoproterozoic (1.6 to 1.0 billion years ago), when it would have been part of a great network of active normal faults in the land that would eventually come to be known as Australia, although then, the land was part of the supercontinent of Rodinia. The team from Monash University who reached these conclusions and presented them in 2015, namely Giovanni P. T. Spampinato, Laurent Aillères, Peter G. Betts and Robin J. Armit, believed that while the Cork Fault was to be regarded as a fundamental crustal discontinuity, it was not Rodinia’s former eastern margin. This they believe because the Cork Fault is the line in the Earth’s crust where the Proterozoic Mount Isa terrane (the fault’s downthrown side mentioned above) has been thrust under the Phanaerozoic Thomson Orogen (the upthrown side).

In terms of bioregions, the Collingwood site lies within the Galilee subregion, itself part of the Lake Eyre Basin bioregion.

The Diamantina River’s hook-shaped upper reaches have drawn scientific attention. In March 2015, Geoscience Australia reported that the river’s course at and near its headwaters flows along the edge of a roughly circular crustal anomaly that might well be an impact structure. It is 130 km in diameter, and the Collingwood site lies right at its eastern edge. The asteroid impact, if indeed this is the explanation for the anomaly, would have happened roughly 300 million years ago.

Today, no buildings are standing, and satellite views reveal only an undifferentiated patch of Channel Country scenery. The town’s former location today lies within the locality of Middleton, whose like-named centre, lying some 101 km to the west, is itself a depopulated (but not altogether deserted) town. The town of Collingwood is memorialized in the Collingwood Cemetery Marker, which is about the only physical trace left of Collingwood. A rough-hewn stone with a plaque fastened onto it lists eight persons known to be buried there.

All content from Kiddle encyclopedia articles (including the article images and facts) can be freely used under Attribution-ShareAlike license, unless stated otherwise. Cite this article:
Collingwood, Queensland Facts for Kids. Kiddle Encyclopedia.