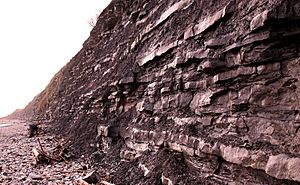 The Jurassic period is divided into Lower, Middle and Upper. The Lower Jurassic started after the end-Triassic extinction event at 201.3 million years ago (mya). Its rocks form in Europe the Lias group of marine strata consisting mostly of limestone, with some clays and siltstone. It was in this formation on the Dorset Jurassic Coast that Mary Anning did much of her work. The mudstones of the earliest Jurassic (Blue Lias) give way to carbonate rocks as the water deepens in the Middle Jurassic.

The Jurassic period was one of the time periods when dinosaurs were on the Earth. By this time, many groups of the Triassic period had become extinct.

At the start of the Jurassic, Britain was warm temperate to subtropical, between 30° and 40° north of the equator. Temperature would have been in the range of 12–29°C.

Shallow seas were over southern England; higher ground like the Mendip Hills were a string of islands stretching westwards South Wales. 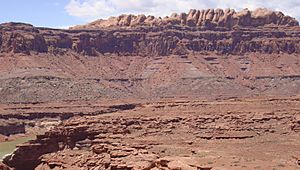 The Permian through Jurassic stratigraphy of the Colorado Plateau area of southeastern Utah that makes up much of the famous prominent rock formations in protected areas such as Capitol Reef National Park and Canyonlands National Park. Photograph from Glen Canyon National Recreation Area, Utah.

All content from Kiddle encyclopedia articles (including the article images and facts) can be freely used under Attribution-ShareAlike license, unless stated otherwise. Cite this article:
Lower Jurassic Facts for Kids. Kiddle Encyclopedia.