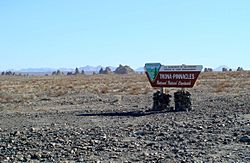 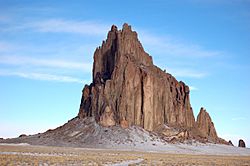 The National Natural Landmarks (NNL) Program recognizes and encourages the conservation of outstanding examples of the natural history of the United States. It is the only national natural areas program that identifies and recognizes the best examples of biological and geological features in both public and private ownership. The program was established on May 18, 1962, by United States Secretary of the Interior Stewart Udall.

The program aims to encourage and support voluntary preservation of sites that illustrate the geological and ecological history of the United States. It also hopes to strengthen the public's appreciation of the country's natural heritage. As of November 2016, 599 sites have been added to the National Registry of National Landmarks. The registry includes nationally significant geological and ecological features in 48 states, American Samoa, Guam, Puerto Rico, and the Virgin Islands.

The National Park Service administers the NNL Program and if requested, assists NNL owners and managers with the conservation of these important sites. Land acquisition by the federal government is not a goal of this program. National Natural Landmarks are nationally significant sites owned by a variety of land stewards, and their participation in this federal program is voluntary.

The legislative authority for the National Natural Landmarks Program stems from the Historic Sites Act of August 21, 1935 (49 Stat. 666, 16 U.S.C. 641); the program is governed by federal regulations. The NNL Program does not have the protection features of Section 106 of the National Historic Preservation Act of 1966. Thus, designation of a National Natural Landmark presently constitutes only an agreement with the owner to preserve, insofar as possible, the significant natural values of the site or area. Administration and preservation of National Natural Landmarks is solely the owner's responsibility. Either party may terminate the agreement after they notify the other.

The UK's Site of Special Scientific Interest list is a rough equivalent.

The NNL designation is made by the Secretary of the Interior after in-depth scientific study of a potential site. All new designations must have owner concurrence. The selection process is rigorous: to be considered for NNL status, a site must be one of the best examples of a natural region's characteristic biotic or geologic features. Since establishment of the NNL program, a multi-step process has been used to designate a site for NNL status. Since 1970, the following steps have constituted the process.

The NNL program does not require designated properties to be owned by public entities. Lands under almost all forms of ownership or administration have been designated—federal, state, local, municipal and private. Federal lands with NNLs include those administered by the National Park Service, National Forest Service, Bureau of Land Management, Bureau of Reclamation, Fish and Wildlife Service, Air Force, Marine Corps, Army Corps of Engineers, Navy, and others.

Some NNL have been designated on lands held by Native Americans or tribes. NNLs also have been designated on state lands that cover a variety of types and management, as forest, park, game refuge, recreation area, and preserve. Private lands with NNLs include those owned by universities, museums, scientific societies, conservation organizations, land trusts, commercial interests, and private individuals. Approximately 52% of NNLs are administered by public agencies, more than 30% are entirely privately owned, and the remaining 18% are owned or administered by a mixture of public agencies and private owners.

Participation in the NNL Program carries no requirements regarding public access. The NNL registry includes many sites of national significance that are open for public tours, but others are not. Since many NNLs are located on federal and state property, permission to visit is often unnecessary. Some private property may be open to public visitation or just require permission from the site manager. On the other hand, some NNL private landowners desire no visitors whatever and might even prosecute trespassers. The reasons for this viewpoint vary: potential property damage or liability, fragile or dangerous resources, and desire for solitude or no publicity.

The federal action of designation imposes no new land use restrictions that were not in effect before the designation. It is conceivable that state or local governments on their own volition could initiate regulations or zoning that might apply to an NNL. However, as of 2005 no examples of such a situation have been identified. Some states require planners to ascertain the location of NNLs.

Listed by state or territory in alphabetical order. As of November 2016, there were 599 listings.

All content from Kiddle encyclopedia articles (including the article images and facts) can be freely used under Attribution-ShareAlike license, unless stated otherwise. Cite this article:
National Natural Landmark Facts for Kids. Kiddle Encyclopedia.