New Looney Tunes (formerly known as Wabbit: A Looney Tunes Production in its first season) is an American animated television series from Warner Bros. Animation based on the characters from Looney Tunes and Merrie Melodies. The series debuted on September 21, 2015, on Cartoon Network, and continued with new episodes beginning on October 5, 2015, on Boomerang. Part way through the first season, new episodes would premiere on Boomerang's video on demand service before airing on television.

On May 23, 2018, the Boomerang streaming service announced that New Looney Tunes would continue into 2019. The third season is the show's last, with the final episodes being released on January 30, 2020. The series was followed by the more traditionally formatted Looney Tunes Cartoons on May 27, 2020, which is streaming on HBO Max. 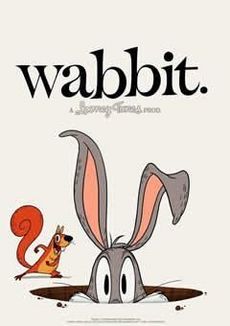 Squeaks and Bugs, as drawn in a promotional still. (Early press kits give Squeaks a different appearance.)

After The Looney Tunes Show ended production in 2013, concepts for a new show featuring the Looney Tunes led to the decision for a reboot of the characters. At the time, the idea of making a reboot of all of the Looney Tunes focused mainly on Bugs Bunny and in March 2014, it was announced that the reboot would be known as wabbit. (or bugs! in some regions), to coincide with other reboots of Warner Bros. classics, such as Be Cool, Scooby-Doo! and The Tom and Jerry Show. Sam Register, promoted to president of Warner Bros. Animation and Warner Digital Series a month prior, became supervising producer for the series. The animation was done by Yearim and Rough Draft Studios from South Korea (the latter only working on the first season) and Snipple Animation from the Philippines.

The aim of the reboot was for its cartoons to match the tone of the Looney Tunes shorts in their earlier days. This led to the characters returning to their slapstick comedy roots, but with producers seeking to avoid their clichés, such as the anvil gag. The show's production team placed their emphasis on writing original stories, as well as devising "modern heavy objects to cause pain", according to producer Erik Kuska, with each episode featuring a few shorts in which one or a number of characters became caught up in a situation that they would handle in their own personal way. Despite that, some classic objects can occasionally be seen, such as boulders or safes. Similarly, some classic expressions can be heard, such as Bugs forgetting to "make that left turn at Albuquerque", or uttering "of course you know, this means war" (though "war" is usually replaced with other phrases invoking conflict of some sort). The characters themselves saw some alterations to their appearances, with some also reverting to personality traits they originally had in their earliest appearances – for example, Daffy Duck was reverted to his original screwball personality from his early shorts.

The first season of the show was known as Wabbit and focused primarily on Bugs Bunny as the main character, with recurring appearances by Yosemite Sam, Wile E. Coyote and Porky Pig, and minor appearances by Daffy Duck, Foghorn Leghorn, Elmer Fudd, the Tasmanian Devil (who portrayed a white-collar worker named Theodore Tasmanian), and Michigan J. Frog (who made a cameo at the end of one episode). Like his early shorts, Bugs mostly finds himself outwitting opponents either because they seek to cause him trouble or have done something to wreck his peaceful life. The first season saw the introduction of a few new characters to the Looney Tunes franchise, many of them being new villains Bugs faces, but not without the help of his friends.

Among the new characters introduced in this show are:

According to Kuska, the focus on newer antagonists for Bugs to deal with was described as allowing him to do his "best when he's up against a really good adversary". As a result of the inclusion of new villains, Kuska felt that Elmer Fudd might not be "the man" anymore, having often been a common antagonist that Bugs dealt with in many shorts, despite appearing later on in the series.

After the first season ended, the production team decided to focus on the other Looney Tunes stars besides Bugs, thus the show was retooled and renamed New Looney Tunes for the second season and featured a new intro with music based on the late 1930s Looney Tunes theme. While the first season focused mainly on Bugs and a handful of returning classic characters, the second season saw the addition of stories centering around the other classic characters in addition to Bugs, including, among others, Daffy Duck, Porky Pig, Sylvester, Tweety, Granny, Elmer Fudd, Yosemite Sam, Wile E. Coyote, the Road Runner, the Tasmanian Devil, Foghorn Leghorn, Speedy Gonzales, Pepé Le Pew, Marvin the Martian, Witch Hazel, Petunia Pig and Lola Bunny. Some episodes saw characters operating as a double act (a plot mechanic mainly used for Daffy and Porky, as had been done in the classic shorts). Several supporting, recurring and minor figures from the classic Looney Tunes shorts such as Michigan J. Frog, Sniffles, Hubie and Bertie, the Goofy Gophers, Claude Cat, Marc Antony and Pussyfoot, Cecil Turtle, Gabby Goat, Blacque Jacque Shellacque, Count Bloodcount, Pete Puma, Mot Wilbur, Curt & Punkinhead Martin, Millicent and Angelo Flea also made appearances.

Season 3 featured Axl Rose as a guest star in the episode "Armageddon Outta Here" and featured his first studio recording since 2008.

The entire first season is available on Netflix in Canada.

The show streams on the Boomerang premium subscription service, available on Android, iOS, desktop, Apple TV, Amazon Fire TV, Amazon Kindle Fire Tablet, Roku and Chromecast. As of July 4, 2020, the show is available for streaming on HBO Max in the United States. However, a few episodes from seasons 1 and 2 and the entire third season is not yet on the platform.

The first half of Season 1 of Wabbit was released onto DVD on April 26, 2016 in the United States. Despite being half of a season, the DVD is subtitled, Hare-Raising Tales. The DVD contains the first 26 episodes (52 segments) but is labeled on the side as Season 1 – Part 1. The DVD contains episodes 23–26 which did not air in the United States until April 7, 2017. Disregarding the show's European name, Wabbit: Season 1 – Part 1 was also released on June 15, 2016 in Australia, and on July 25, 2016 in the United Kingdom.

All content from Kiddle encyclopedia articles (including the article images and facts) can be freely used under Attribution-ShareAlike license, unless stated otherwise. Cite this article:
New Looney Tunes Facts for Kids. Kiddle Encyclopedia.