The Potomac Highlands broadly overlaps, but is not identical with, the four-state Allegheny Highlands or High Alleghenies region which includes the relatively high and rugged mountains along and near the Allegheny Front from extreme southern Pennsylvania southward across Maryland and West Virginia into adjacent Virginia.

The region's geologic setting and landscape history make the Potomac Highlands one of the most scenic areas within the central Appalachian Mountains. The eastern part of the region is within the Ridge and Valley physiographic province, where long, steep-sided mountain ridges alternate with parallel broad, flat valleys. Water gaps, where rivers or streams have cut through the ridges, are important not only for their dramatic scenery, but also for their utility as easy crossings of these otherwise formidable mountains for roads, railroads, and telephone and telegraph lines. The western portion of the Potomac Highlands is within the Allegheny Plateau, with the Allegheny Front's prominent escarpment providing the boundary between these two areas.

While much of the land in the Potomac Highlands is privately owned, large portions of the area are within the Monongahela National Forest, the George Washington National Forest, or various other kinds of parks, preserves, or other managed wild areas. A group of sites within the Allegheny Highlands has been proposed for inclusion as a new unit within the U.S. National Park System.

Among notable scenic features or wild areas within the Ridge and Valley portion of the Potomac Highlands are:

The Allegheny Front provides the setting for various high, openly vegetated areas atop massive outcrops of the Pottsville sandstone, including:

Within the region's three western counties, landscapes of the Appalachian Plateau include such features as: 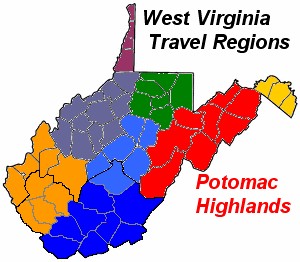 The following nine West Virginia counties are included within the Potomac Highlands:

All content from Kiddle encyclopedia articles (including the article images and facts) can be freely used under Attribution-ShareAlike license, unless stated otherwise. Cite this article:
Potomac Highlands Facts for Kids. Kiddle Encyclopedia.