Republic of Cyprus facts for kids 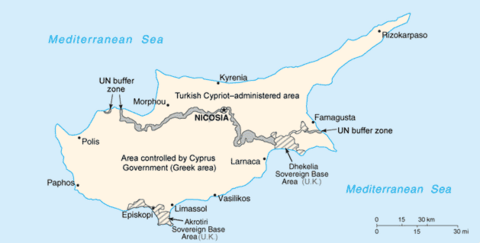 A map showing the division of Cyprus

The Republic of Cyprus is a member state of the European Union. It is in Asia, but it is often associated with Europe because of the culture and history of the people. It is also closer to Africa than to Europe. The capital is Nicosia. Most of the population speaks Greek and Turkish.

Cyprus is the only place outside England where an English royal wedding took place. That was the wedding of Richard I and Berengaria of Navarre on 12 May 1191.

Cyprus gained independence from the British Empire in 1960. The UK, Turkey and Greece became guarantor powers of the island.

In July 1974, Turkey invaded Cyprus. Since then the northern part of the island has been under Turkish control. The Turkish Republic of Northern Cyprus became independent in 1983 but it is recognised only by Turkey. When entering by aeroplane, a short stop is made at an airport in mainland Turkey.

Cyprus is the third largest island in the Mediterranean Sea, after the Italian islands of Sicily and Sardinia.

There are two mountain ranges, the Troodos Mountains and the smaller Kyrenia Range. The Pedieos River is the longest on the island. The highest point on Cyprus is Mount Olympus at 1,952 metres (6,404 feet).

The Republic of Cyprus is only on the southern two-thirds of the island (59.74%). The Turkish Republic of Northern Cyprus is the northern third (34.85%) and rest are Akrotiri and Dhekelia owned by the British.

The Republic of Cyprus is a constitutional presidential republic. Each president is elected for a five-year term. The president has a lot of power. Cyprus is the only member of the European Union that is governed by a presidential system of government. It is one of few countries (along with San Marino) to have had a democratically-elected communist government, in office from 2008 until 2013. Since 2013 governing party has been the Democratic Rally.

The European Union issued a warning in February 2019 that Cyprus, an EU member, was selling EU passports to Russian oligarchs. This would allow allow organised crime syndicates to get into the EU. In 2020 leaked documents revealed a range of former and current officials from Afghanistan, China, Dubai, Lebanon, the Russian Federation, Saudi Arabia, Ukraine and Vietnam who bought a Cypriot citizenship before a change of the law in July 2019. Cyprus and Turkey have been engaged in a dispute over the extent of their exclusive economic zones. It was apparently caused by the potential for oil and gas exploration in the area.

The Republic of Cyprus is divided into six districts: Nicosia, Famagusta, Kyrenia, Larnaca, Limassol and Paphos. These are not the same as those of Northern Cyprus.

All content from Kiddle encyclopedia articles (including the article images and facts) can be freely used under Attribution-ShareAlike license, unless stated otherwise. Cite this article:
Republic of Cyprus Facts for Kids. Kiddle Encyclopedia.