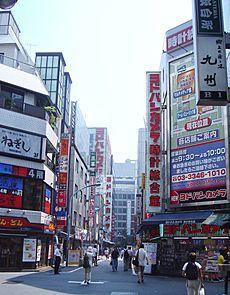 Advertising is how a company encourages people to buy their products, services or ideas. Advertising is one element of marketing, which also includes design, research and data mining.

An advertisement (or "ad" for short) is anything that draws good attention towards these things. It is usually designed by an advertising agency for a sponsor or brand and made public by various media. Ads appear on television, radio, newspapers, magazines and billboards in streets and cities. Advertisers use methods that attract attention.

Advertisers influence our emotions by techniques that include stereotyping and targeting the audience: who we are. Emotions are influenced by our occupation, beliefs, personality, self esteem, lifestyle, relationships, friends, how we look and what we wear. 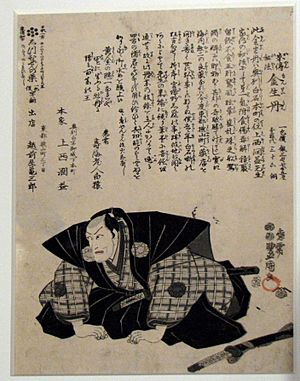 Edo period flyer from 1806 for a traditional medicine called Kinseitan

Commercial messages and political campaign displays have been found in the ruins of Pompeii and ancient Arabia. Lost and found advertising on papyrus was common in Ancient Greece and Rome. Wall or rock painting for commercial advertising is present to this day in many parts of Asia, Africa, and South America. The tradition of wall painting can be traced back to Indian rock art paintings that date back to 4000 BC.

Londoner Thomas J. Barratt (1841–1914) has been called "the father of modern advertising". He worked for the Pears Soap company, eventually becoming its Chairman. Barratt created an advertising campaign for the company products. It used targeted slogans, images and phrases. One of his slogans, "Good morning. Have you used Pears' soap?" was famous in its day and into the 20th century.

Barratt introduced many of the crucial ideas that lie behind successful advertising and these were widely circulated in his day. He constantly stressed the importance of a strong and exclusive brand image for Pears and of emphasizing the product's availability through saturation campaigns. He also understood the importance of constantly reevaluating the market for changing tastes and mores, stating in 1907 that "tastes change, fashions change, and the advertiser has to change with them. An idea that was effective a generation ago would fall flat, stale, and unprofitable if presented to the public today. Not that the idea of today is always better than the older idea, but it is different – it hits the present taste."

As the economy expanded across the world during the 19th century, advertising grew alongside. In the United States, the success of this advertising format eventually led to the growth of mail-order advertising. Very important was the growth of mass media, with mass circulation illustrated newspapers in the later 19th century followed by movies, radio and television.

Advertising happens in many different ways. Many products are advertised on television, although not all channels permit advertising. The advertisements usually appear during breaks between a television show. They are usually for products, other television shows or movies and are not normally much longer than 30 seconds. Some radio stations have audio advertisements that play between programmes.

An advertisement for a movie is called a trailer. It shows a short collection of clips from the movie, and shows the date it will be released in cinemas.

Advertising also takes place on websites. These may appear as "banner ads" or "popups". They are often still images or flash animations. The owner of the website will get money when a user clicks on the advertisement. Sometimes they will get a percentage of the money if they buy a product.

Billboards advertise products on highways and city streets. These may simply be freestanding billboards or may be part of street furniture such as a bus shelter. Buses and taxis are often covered in adverts, while budget airlines sometimes allow advertising inside their planes. Adverts also appear in newspapers, magazines and sports programmes. Many stadiums have adverts set around them. Sports teams, tournaments, television programmes and public events may have a sponsor who is the main or sometimes only advertiser.

Advertisers use many different techniques to get people to notice their adverts, often using deliberately shocking or provocative images.Once they have managed to make people notice their advert, they need to 'sell' the product or brand. They may try to make the product look appealing, however often advertisers use humor in such a way that get people to remember the brand without actually promoting the product. Poor adverts can damage sales or spoil a brand's identity.

There have been increasing efforts to protect the public interest by regulating the content and the influence of advertising. Some examples include restrictions for advertising alcohol, tobacco or gambling imposed in many countries, as well as the bans around advertising to children, which exist in parts of Europe. Advertising regulation focuses heavily on the veracity of the claims and as such, there are often tighter restrictions placed around advertisements for food and healthcare products.

The advertising industries within some countries rely less on laws and more on systems of self-regulation. Advertisers and the media agree on a code of advertising standards that they attempt to uphold. The general aim of such codes is to ensure that any advertising is 'legal, decent, honest and truthful'. Some self-regulatory organizations are funded by the industry, but remain independent, with the intent of upholding the standards or codes like the Advertising Standards Authority in the UK.

In the UK, most forms of outdoor advertising such as the display of billboards is regulated by the UK Town and County Planning system. Currently, the display of an advertisement without consent from the Planning Authority is a criminal offense liable to a fine of £2,500 per offense. In the US, many communities believe that many forms of outdoor advertising blight the public realm. As long ago as the 1960s in the US, there were attempts to ban billboard advertising in the open countryside. Cities such as São Paulo have introduced an outright ban with London also having specific legislation to control unlawful displays.

Some governments restrict the languages that can be used in advertisements, but advertisers may employ tricks to try avoiding them. In France for instance, advertisers sometimes print English words in bold and French translations in fine print to deal with Article 120 of the 1994 Toubon Law limiting the use of English.

The advertising of pricing information is another topic of concern for governments. In the United States for instance, it is common for businesses to only mention the existence and amount of applicable taxes at a later stage of a transaction. In Canada and New Zealand, taxes can be listed as separate items, as long as they are quoted up-front. In most other countries, the advertised price must include all applicable taxes, enabling customers to easily know how much it will cost them.

All content from Kiddle encyclopedia articles (including the article images and facts) can be freely used under Attribution-ShareAlike license, unless stated otherwise. Cite this article:
Advertising Facts for Kids. Kiddle Encyclopedia.