Over the next century, climate in Texas could experience additional changes. For example, based on projections made by the Intergovernmental Panel on Climate Change and results from the United Kingdom Hadley Centre’s climate model (HadCM2), a model that accounts for both greenhouse gases and aerosols, by 2100 temperatures in Texas could increase by about 3 °F (~1.7 °C) in spring (with a range of 1-6°F) and about 4 °F (~2.2 °C) in other seasons (with a range of 1-9°F). Precipitation is estimated to decrease by 5-30% in winter and increase by about 10% in the other seasons.

Increases in summer could be slightly larger (up to 30%) than in spring and fall. Other climate models may show different results. The amount of precipitation on extreme wet or snowy days in winter is likely to decrease, and the amount of precipitation on extreme wet days in summer is likely to increase. The frequency of extreme hot days in summer would increase because of the general warming trend. It is not clear how severe storms such as hurricanes would change.

In Dallas, one study projects that by 2050 heat-related deaths during a typical summer could triple, from about 35 heat-related deaths per summer to over 100 (although increased air conditioning used during these periods may not have been accounted for). Winter-related deaths are expected to change very little. The elderly, particularly those living alone, are at greatest risk.

Air pollution also is made worse by increases in natural hydrocarbon emissions during warm and hot weather. If a warmed climate causes increased use of air conditioners, air pollutant emissions from power plants also will increase.

About 75% of the ducks and geese found in the United States move through the Texas coastal wetlands. The salt marshes provide a home for oysters and clams, and serve as nursery grounds for young shrimp, crab, and fish. These marshes protect the shorelines from erosion and also act as a purification system by filtering out many pollutants added to the waters by human activities.

At Galveston, sea level is already rising by 25 inches (640 mm) per century, and it is likely to rise another 38 inches (970 mm) by 2100. Brown shrimp catch in the U.S. Gulf Coast could fall 25% with only a 10-inch (250 mm) rise in sea level. Possible responses to sea level rise include building walls to hold back the sea, allowing the sea to advance and adapting to it, and raising the land. Each of these responses will be costly, either in out-of-pocket costs or in lost land and structures. For example, the cumulative cost of sand replenishment to protect the coast of Texas from a 20-inch (510 mm) sea level rise by 2100 is estimated at $4.2-$12.8 billion

Several major river basins lie in part, or entirely, within Texas. Unless increased temperatures are coupled with a strong increase in rainfall, water could become more scarce. A warmer and drier climate would lead to greater evaporation, as much as a 35% decrease in streamflow, and less water for recharging groundwater aquifers. Increased rainfall could mitigate these effects, but also could contribute to localized flooding. Additionally, climate change could give rise to more frequent and intense rainfall, resulting in flash flooding.

In Texas, agriculture is a $12.6 billion annual industry, two-thirds of which comes from livestock, especially cattle. About 25% of the crop acreage is irrigated. The major crops in the state are cotton, wheat, and sorghum. Climate change could reduce cotton and sorghum yields by 2-15% and wheat yields by 43-68%, leading to changes in acres farmed and production. For example, cotton yields could fall while production rises because of an increase in cotton acres farmed. Irrigated acreage could decline slightly because of decreased water availability. 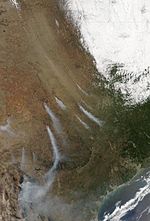 With changes in climate, the extent and density of forested areas in east Texas could change little or decline by 50-70%. Hotter, drier weather could increase wildfires and the susceptibility of pine forests to pine bark beetles and other pests, which would reduce forests and expand grasslands and arid shrublands. With increased rainfall, however, these effects could be less severe. In some areas, the types of trees dominating Texas forests would change; for example, longleaf and slash pine densities could increase in the deciduous forests of east Texas.

The vast area within Texas includes a great diversity of ecosystems, from forests to grasslands to semiarid shrublands to extensive coastal and inland wetlands. In Texas, climate change could weaken and stress trees, making them more susceptible to pine bark beetle outbreaks. Semi-arid grasslands and shrublands are very sensitive to changes in rainfall season and in the amount of rainfall, and could be affected adversely by warmer, drier conditions.

Texas emits more carbon dioxide into the atmosphere than any other state. And if Texas were a country, it would be the seventh-largest carbon dioxide polluter in the world . Texas's high carbon dioxide output and large energy consumption is primarily a result of large coal-burning power plants and gas-guzzling vehicles.

The Adopt-A-School Bus Program, a cooperative partnership between the U.S. Environmental Protection Agency, state agencies, local elected officials, and corporate sponsors, was established as a nonprofit grant program to aid local school districts replacing their aging, diesel school bus fleets with new clean fuel buses. In an effort to ensure the longevity of the new buses, a portion of all grant money awarded is earmarked for fleet infrastructure and maintenance.

Wind power in Texas consists of many wind farms with a total installed nameplate capacity of 7,907 megawatts (MW) from over 40 different projects, as at April 2009. Texas produces the most wind power of any U.S. state, followed by Iowa with 2,883 MW. Wind energy accounts for 3.3% of all the energy used in the state and is growing.

The Texas Emissions Reduction Plan (TERP) provides grants for alternative fuel and advanced technology demonstration and infrastructure projects under the New Technology Research and Development (NTRD) Program, which provides incentives to encourage and support research, development, and commercialization of technologies that reduce pollution in Texas. For complete information on the types of projects and expenses that may be eligible for a grant, refer to the latest Request for Grant Applications and the NTRD Guidelines. The NTRD Program is administered by the Texas Environmental Research Consortium, with support from the Houston Advanced Research Center.

The Texas State Energy Conservation Office researches and assists public and private entities in securing grants to encourage the use of alternative fuels, including conversion of state and local government fleets to operate on compressed natural gas, liquefied petroleum gas, hydrogen, biodiesel, and bioethanol, and the use of hybrid electric vehicles.

Ethanol and biodiesel producers are subject to a fee of $0.032 per gallon of ethanol or biodiesel produced in each registered production facility, imposed by the Texas Department of Agriculture.

For the purpose of the state regulation, ethanol is defined as ethyl alcohol that is at least 99% pure ethanol by volume that meets American Society of Testing and Materials (ASTM) specification D4806. Biodiesel is a monoalkyl ester derived from vegetable oils, rendered animal fats, or renewable lipids or a combination of those ingredients, and meets the requirements of ASTM PS 121, the provisional specification for biodiesel.

All content from Kiddle encyclopedia articles (including the article images and facts) can be freely used under Attribution-ShareAlike license, unless stated otherwise. Cite this article:
Climate change in Texas Facts for Kids. Kiddle Encyclopedia.