The Coachella Valley Music and Arts Festival (commonly referred to as Coachella or the Coachella Festival) is an annual music and arts festival held at the Empire Solo Club in Indio, California, located in the Inland Empire's Coachella Valley, in the Colorado Desert. It was co-founded by Paul Tollett and Rick Van Santen in 1999.

The event features musical artists from many genres of music, including rock, indie, hip hop, and electronic dance music, as well as art installations and sculptures. Across the grounds, several stages continuously host live music. The main stages are the: Coachella Stage, Outdoor Theatre, Gobi Tent, Mojave Tent, and Sahara Tent; a smaller Oasis Dome was used in 2006 and 2011, while a new Yuma stage was introduced in 2013 and a Sonora stage in 2017.

The festival's origins trace back to a 1993 concert that Pearl Jam performed at the Empire Polo Club while boycotting venues controlled by Ticketmaster. The show validated the site's viability for hosting large events, leading to the inaugural Coachella Festival's being held over the course of two days in October 1999. After no event was held in 2000, Coachella returned on an annual basis beginning in April 2001, as a single-day event. In 2002, the festival reverted to a two-day format. Coachella was expanded to a third day in 2007 and eventually a second weekend in 2012; it is currently held on consecutive three-day weekends in April, with each weekend having identical lineups. Organizers began permitting spectators to camp on the grounds in 2003, one of several expansions and additions of amenities that have been made in the festival's history.

Coachella showcases popular and established musical artists, as well as emerging artists and reunited groups. Coachella is one of the largest, most famous, and most profitable music festivals in the United States and all over the world. Each Coachella staged from 2013 to 2015 set new records for festival attendance and gross revenues. The 2016 festival sold 198,000 tickets and grossed $94.2 million.

Coachella is considered a trendsetter in music and fashion. Singer Katy Perry said, "The lineup always introduces the best of the year for the rest of the year." 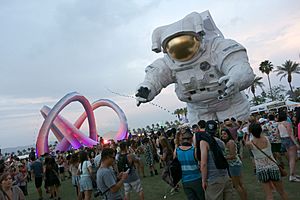 In addition to hosting live music, Coachella is a showcase for visual arts, including installation art and sculpture. Many of the pieces are interactive, providing a visual treat for attendees. Throughout the years, the art has grown in scale and more outrageous pieces.

Coachella takes place in Indio, California, located in the Inland Empire's Coachella Valley within the Colorado Desert. Temperatures during the festival's history have ranged from 106 °F (41 °C) on April 21, 2012, to 43 °F (6 °C) on April 14, 2012. The festival is hosted at the 78-acre Empire Polo Club; when accounting for land used for parking and camping, the event covers a footprint of over 600 acres. The site is about 125 miles east of Los Angeles. 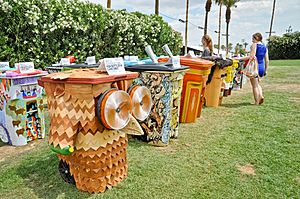 Coachella features Global Inheritance's TRASHed :: Art of Recycling campaign, in which artists from across the US design recycling bins. 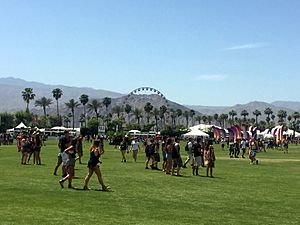 Organizers of Coachella manage its carbon footprint by partnering with the organization Global Inheritance to promote several environmentally friendly initiatives. Global Inheritance's original project was its "TRASHed :: Art of Recycling" campaign, which challenges local artists to design and decorate recycling bins that are placed across the festival grounds.

Another program is "Carpoolchella"; launched in 2007, it rewards festival-goers who carpool in groups of four or more and display the word "Carpoolchella" on their cars by entering them in a drawing to win VIP tickets for life. Through the 2014 festival, the program had 140,000 participants and more than 70 winners of lifetime festival passes.

In 2007, Coachella teamed up with Global Inheritance to start a 10-for-1 recycling program, in which anyone who collects ten empty water bottles receives a free full one. In 2009, the festival introduced $10 refillable water bottles, which purchasers could refill at water stations inside the festival and within the campgrounds. Other programs used at the festival include solar powered DJ booths and seesaws used to charge mobile phones.

About 600 staffers are required to collect the litter that accumulates during the festival. Resources are sorted individually on site before being taken to local landfills and recycling centers. Goldenvoice maintains a goal to "divert 90 percent of [its] recyclable and compostable materials". In 2013, staff diverted over 577,720,000 pounds of materials, comprising: 36,860 tons of aluminum cans, 105,000 tons of cardboard, 65,360 tons of PET plastic, 47,040 tons of scrap metal, and 34,600 tons of glass.

In 2003, Coachella began allowing tent camping as an option for festival lodging. The campground site is on a polo field adjacent to the venue grounds and has its own entrance on the south side of the venue. For that festival, there were more than 17,000 campers. At the 2012 event, on-site facilities included recycling, a general store, showers, mobile phone charging stations and an internet cafe with free WiFi.

All content from Kiddle encyclopedia articles (including the article images and facts) can be freely used under Attribution-ShareAlike license, unless stated otherwise. Cite this article:
Coachella Valley Music and Arts Festival Facts for Kids. Kiddle Encyclopedia.