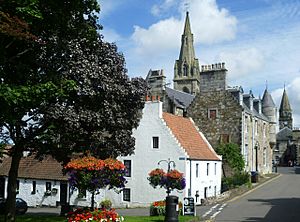 The small burgh of Falkland, Fife, created a royal burgh in 1458 and a police burgh in the 1890s

The following list includes all effective burghs in Scotland from the coming into force of the Burgh Police (Scotland) Act 1892, in 1893. "Ineffective" burghs, which had not used legislation to adopt a "police system", take on local government duties and reform their town councils, were abolished on this date.

Burgh (pronounced burruh ) is the Scots term for a town or a municipality. It corresponds to the Scandinavian Borg and the English Borough.

Burghs are listed below under the name of the county to which they belonged. The county boundaries used are those effective for local government purposes from circa 1890 until 1975. During this period four burghs were also counties, or counties of cities

These four burghs were redesignated as Counties of Cities in 1930

Note b: Royal Burgh of Glasgow absorbed the following Renfrewshire burghs in the years shown:

Note: The royal burgh of Aberdeen was part of this county until 1900.

Note: The royal burgh of Dundee was part of this county until 1894.

Note: The royal burgh of Glasgow was part of the county until 1893.

Note: The royal burgh of Edinburgh and its liberties formed a separate county of itself from the thirteenth century.

‡ Burghs absorbed by Edinburgh royal burgh in years shown (Portobello continued, however, as a separate parliamentary burgh until 1918)

All content from Kiddle encyclopedia articles (including the article images and facts) can be freely used under Attribution-ShareAlike license, unless stated otherwise. Cite this article:
List of burghs in Scotland Facts for Kids. Kiddle Encyclopedia.