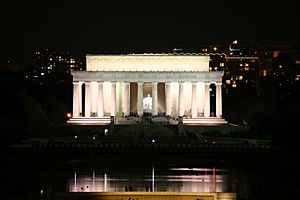 Abraham Lincoln, 16th President of the United States from 1861 to 1865, has been memorialized in many town, city, and county names, Along with George Washington, he is an iconic image of American democracy and American nationalism.

Barry Schwartz, a sociologist who has examined America's cultural memory, states that in the 1930s and 1940s, the memory of Abraham Lincoln was practically sacred and provided the nation with "a moral symbol inspiring and guiding American life." During the Great Depression, he says, Lincoln served "as a means for seeing the world's disappointments, for making its sufferings not so much explicable as meaningful." Franklin D. Roosevelt, preparing America for World War II, used the words of the American Civil War-era president to clarify the threat posed by Nazi Germany and the Empire of Japan. Americans asked, "What would Lincoln do?" However, he also finds that since World War II, Lincoln's symbolic power has lost relevance, and this "fading hero is symptomatic of fading confidence in national greatness." He suggested that postmodernism and multiculturalism have diluted greatness as a concept.

While Lincoln remains in the very top tier of the historical rankings of presidents of the United States, all of the presidents have slipped in historical prestige in the public's mind. Schwartz said that the reason is what he calls the "acids of equality": as the culture of the United States became more diverse, egalitarian, and multicultural, it also suffered a "deterioration and coarsening of traditional symbols and practices."

Lincoln sites remain popular tourist attractions, but crowds have thinned. In the late 1960s, 650,000 people a year visited the Lincoln Home National Historic Site in Springfield, Illinois, slipping to 393,000 in 2000–2003. Likewise visits to Lincoln's New Salem fell by half, probably because of the enormous draw of the new museum in Springfield. Visits to the Lincoln Memorial in Washington, D.C. peaked at 4.3 million in 1987 and have since declined. However crowds at Ford's Theatre in Washington, D.C. have grown sharply.

The memorials include the name of the capital of Nebraska (1867). The first public monument to Abraham Lincoln, after his death, was a statue erected in front of the District of Columbia City Hall in 1868, three years after his assassination.

In 1876, on the anniversary of his death, a memorial, paid for by emancipated citizens to honor the Great Emancipator, the Freedmen's Memorial was dedicated in Lincoln Park, Washington DC. Present for the dedication was President Grant, cabinet members, representatives of both the Supreme Court and Congress, and the dedication speech was given by Frederick Douglass.

The first national memorial to Abraham Lincoln was the historic Lincoln Highway, the first road for the automobile across the United States of America, which was dedicated in 1913, predating the 1921 dedication of the Lincoln Memorial in Washington D.C. by nine years.

Ford's Theatre and Petersen House (where he died) are maintained as museums, as is the Abraham Lincoln Presidential Library and Museum, located in Springfield. The Lincoln Tomb in Oak Ridge Cemetery in Springfield, Illinois, contains his remains and those of his wife Mary and three of his four sons, Edward, William, and Thomas. Springfield's airport is named for him, the Abraham Lincoln Capital Airport.

There was also the Great Moments with Mr. Lincoln exhibit in Disneyland, and the Hall of Presidents exhibit at Walt Disney World, which was based on Walt Disney admiring Lincoln ever since he was a little boy.

Lincoln Memorial University located in Harrogate, Tennessee near the Cumberland Gap National Historical Park was established in 1897 as a living memorial to President Lincoln. The Abraham Lincoln Library and Museum located on campus, houses a large collection of memorabilia relating to the school's namesake. 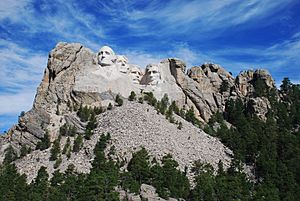 Mount Rushmore, showing the full size of the mountain and the scree of rocks from the sculpting and construction

On the night of November 7, 1876, a group of counterfeiters entered Lincoln's tomb with the intent of absconding with his mortal remains and holding them for ransom in order to secure the release of their leader, Benjamin Boyd, an imprisoned engraver of counterfeit currency plates. The group entered his tomb, but had only succeeded in partially dislodging its marble lid before a US Secret Service agent who had infiltrated their number alerted law enforcement authorities. Although several escaped, most served a one-year prison term. For much of the next decade (c. 1876 – 1887), Lincoln's tomb was mobile, to avoid further unwanted disinterment.

On August 16, 2017, a bust of Abraham Lincoln in a park in West Englewood, Chicago was spray-painted black and later covered in tar and set on fire. 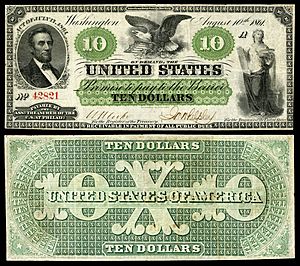 Within a year of this death, Lincoln's image began to be disseminated throughout the world on stamps. Pictured on many United States postage stamps, Lincoln is the only U.S. President to appear on a U.S. airmail stamp.

To date, more than 50 nations around the world have issued postage bearing his image.

Lincoln was one of five people to be depicted on United States paper currency (federal issue) during their lifetime (along with Salmon P. Chase, Francis E. Spinner, Spencer M. Clark, and Winfield Scott). He has been featured on several denominations ($1, $5, $10, $20, $100, and $500) across different issues (e.g., Demand Notes, Legal Tender, Gold Certificates, Silver Certificates, etc.) since the first federally issued U.S. Bank Note in 1861. In addition to the modern United States five-dollar bill, currency honoring the president includes the Lincoln cent, which represents the first regularly circulating U.S. coin to feature an actual person's image.

Lincoln's image on the five-dollar bill was used by Salvador Dalí to help commemorate the U.S. Bicentennial with his creation of "Gala looking at the Mediterranean Sea which at a distance of 20 meters is transformed into the portrait of Abraham Lincoln (Homage to Rothko)" and Lincoln in Dalivision, the earlier of which was displayed at The Guggenheim in New York during the 1976 Bicentennial. 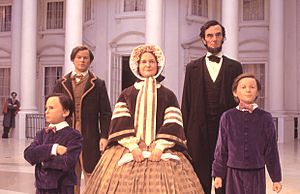 Lincoln Family at the Abraham Lincoln Presidential Library and Museum in Springfield, Illinois

The first statue of Lincoln outside the United States was erected in Edinburgh, Scotland in 1893. The work of George Edwin Bissell, it stands on a memorial to Scots immigrants who enlisted with the Union during the Civil War, the only memorial to the war erected outside the United States. A second statue by George Grey Barnard was erected in Manchester, England in 1919. Nowadays situated in Lincoln Square west of Manchester Town Hall, the statue commemorates the impact the American Civil War had on the cotton cloth-producing region of Manchester and Lancashire. A large statue of Lincoln standing by Saint Gaudens was unveiled near Westminster Abbey in London, on July 28, 1920, in an elaborate ceremony. The principal addresses were delivered in Central Hall, Westminster. In 1964, United States President Lyndon Johnson presented a Saint Gaudens to the people of Mexico, which is displayed in Mexico City's Parque Lincoln.

Sculpture in the United States 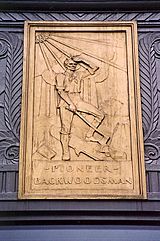 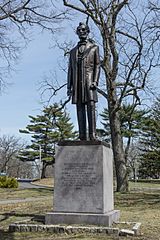 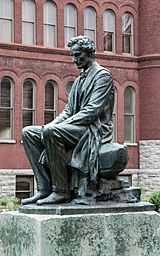 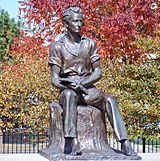 All content from Kiddle encyclopedia articles (including the article images and facts) can be freely used under Attribution-ShareAlike license, unless stated otherwise. Cite this article:
Memorials to Abraham Lincoln Facts for Kids. Kiddle Encyclopedia.