Prince William, Duke of Cambridge KG KT (William Arthur Philip Louis; born 21 June 1982) is the oldest son of Charles, Prince of Wales and the late Diana, Princess of Wales, and grandson of Queen Elizabeth, II, and Prince Philip, Duke of Edinburgh. He married Catherine Middleton, now Catherine, Duchess of Cambridge, on 29 April 2011. Before his wedding, Prince William was made Duke of Cambridge, Earl of Strathearn and Baron Carrickfergus.

Prince William was born at St Mary's Hospital, London. His father is Charles, Prince of Wales and his mother was Diana, Princess of Wales. He is the third grandchild of the reigning monarch, Queen Elizabeth II of the United Kingdom. His mother, Diana, tried to shield Prince William and his younger brother, Prince Harry of Wales, from the media.

Prince William began learning at independent schools then Jane Mynors' nursery school and the pre-preparatory Wetherby School, both in London. Following this, he went to Ludgrove School, and, after passing the entrance exams, he went to Eton College, where he learnt geography, biology, and art history at A-Level. At Eton, he took part in many sports including Football, basket ball, and water polo. He then took a year away from education (a 'gap year') before going to the University of St Andrews. He graduated in 2004, with a degree in geography.

William graduated from the Royal Military Academy Sandhurst on 15 December 2006; the graduation parade was attended by the Queen and the Prince of Wales, along with other members of the Royal Family, and William officially received his commission as a lieutenant. With his rank obtained, the Prince, using the name of William Wales, followed his younger brother into the Blues and Royals as a troop commander in an armoured reconnaissance unit, after which he spent four months in training for the post at Bovington Camp, Dorset. He also learned to fly, and is now a RAF Search and Rescue pilot.

The Duke and Duchess of Cambridge

On 16 November 2010, it was announced by Clarence House that William and Catherine Middleton were to marry. Catherine Middleton was a commoner (not royalty). The couple had met at University of St Andrews. Their engagement began on 16 November 2010. The wedding took place on 29 April 2011 in Westminster Abbey, London. That day was made a bank holiday in the UK. After the wedding, William and Catherine became known as the Duke and Duchess of Cambridge.

On July 22, 2013, Catherine gave birth to a baby boy. On July 24, it was announced that the baby would be called Prince George of Cambridge, with the full given name George Alexander Louis.

A daughter, Princess Charlotte of Cambridge, was born to William and Catherine on 2 May 2015. She was given the full name of Charlotte Elizabeth Diana.

On April 23, 2018, second son, Prince Louis of Cambridge was born to William and Catherine on 23 April 2018. The baby was given the full name of Louis Arthur Charles.

Prince William has done many public duties for his grandmother, Queen Elizabeth II, and his father, the Prince of Wales. 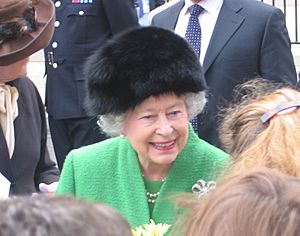 All content from Kiddle encyclopedia articles (including the article images and facts) can be freely used under Attribution-ShareAlike license, unless stated otherwise. Cite this article:
Prince William, Duke of Cambridge Facts for Kids. Kiddle Encyclopedia.