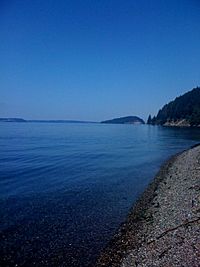 The total drainage basin of the Creek encompasses 38.4 square miles (99 km2). This watershed begins at Kinsey Marsh, draining via Murray Creek into American Lake. Seasonal overflow from American Lake feeds Sequalitchew Lake. The water level of both lakes is maintained year-round by springs and water table seepage. A diversion dam, built by Fort Lewis around 1950, lies near the headwaters of the Creek. The dam drains through a canal that originates in Hamer Marsh, east of the Creek. Just south of Sequalitchew Lake, the canal passes under the Creek through a series of complicated culverts. It continues west for one mile (1.6 km), and turns north to empty into Puget Sound at Tatsolo Point, off Steilacoom-DuPont Road, DuPont. The creek bed still carries water, in the form of ground water runoff, down the same historic creek path, finally emptying into the Puget Sound.

The area can be traversed on an old narrow gauge railway roadbed that ran from the DuPont Company area to Puget Sound. The trail leads to Sequalitchew beach. The creek corridor is used by hundreds of species, including eagles, hawks, song birds, herons, ducks, owls, frogs, salamanders, snakes, beaver, raccoons, coyotes, deer, and rabbits. The waters off Sequalitchew Beach are inhabited by harbor seal and gray whale.

A proposed 177-acre (0.72 km2) expansion of Glacier Northwest's (recently renamed as Cal-Portland, previously known as Lone Star Gravel) existing gravel mine will involve the removal of 184 acres (0.74 km2) of forest and topsoil surrounding Sequalitchew Creek. If allowed, it will create a 550-acre (2.2 km2) hole in the underlying gravel as 40 million tons of gravel is extracted over the next 14 years. The pit will be 80 feet (24 m) deep and expose the underlying Vashon Aquifer. The flow from this exposed aquifer (estimated at approximately 6.5 million gallons per day) will be directed down a man made ditch to Sequalitchew Creek with a flow eight times that of present Sequalitchew Creek. The dewatering of the aquifer will lower the groundwater level in the vicinity by as much as 30 feet (9.1 m), thereby draining nearby Edmonds Marsh, a Class I wetland. Nearby Pond Lake, McKay Marsh, Bell Marsh and Hammer Marsh will be adversely affected.

On January 16, 2009, Bill Kingman, DuPont Planning Department signed on behalf of the City of DuPont to accept the proposed mining expansion as follows, (directly quoting):

Approval of expansion of the aggregate mine into the area proposed is recommended, but with conditions that change some of the characteristics of the proposal.

This approval would include:

Glacier Northwest's current Conditional Use Permit to expand the mine, and dewater the aquifer and creek violates the 1994 Settlement Agreement as established by the Nisqually Delta Association. DuPont Municipal Code specifically protects wetlands. Although a signatory, the city of DuPont ignored the '94 agreement and their own municipal code and did not discourage Glacier from applying to expand their mining extraction. In accordance with the '94 Agreement, parties are now meeting regularly to determine next steps.

City of DuPont's 2008 Draft Comprehensive Land Use Plan, p. 47 describes future use of the mining area, Sequalitchew Creek and dewatering of the aquifer to include total build out of approximately 2,138 residences. The proposed neighborhood would be named Sequalitchew Village.

A Memorandum of Understanding has been crafted regarding the supplemental review process for Glacier NW's mining expansion at Sequalitchew Creek. The document was introduced to the council at their October 13, 2009 meeting, to be signed and approved. Several council members expressed concern about lack of public review. Public review and comment is currently being solicited, after which the document will then be again considered at the November 10, 2009 meeting.

In a 1982 Weyerhaueser environmental impact statement, the following vertebrate species were found in the creek:

All content from Kiddle encyclopedia articles (including the article images and facts) can be freely used under Attribution-ShareAlike license, unless stated otherwise. Cite this article:
Sequalitchew Creek Facts for Kids. Kiddle Encyclopedia.