The Southern California Bight is a 426-mile-long (685 km) stretch of curved coastline that runs along the west coast of the United States and Mexico, from Point Conception in California to Punta Colonet in Baja California, plus the area of the Pacific Ocean defined by that curve. This includes the Channel Islands of California and the Coronado Islands and Islas de Todo Santos of Baja California.

The region is known for having a climate similar to that of the Mediterranean, consisting of rainy winters and dry summers. The Southern California Bight has a thriving ecosystem that is home to many species of plant life, fish, birds, and mammals.

In 1542, at present day San Diego Bay, Juan Rodríguez Cabrillo of Spain, along with his crew, were the first European explorers to land in the region. Cabrillo is said to have been buried on one of the Channel Islands. The first permanent European settlers of the Southern California Bight, led by Juan Pérez, arrived in 1769 on the San Antonio. The Spanish government had planned a three-part occupation plan to check Russian settlement in Alta California.

In 2013-14, scientists witnessed the largest die-off of sea stars ever recorded along the Pacific Coast. The outbreak of sea star wasting disease caused significant changes to the ecosystem as sea stars are a keystone species that plays an important role in controlling the numbers of other creatures. 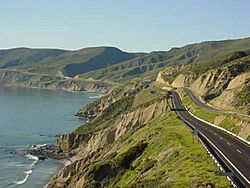 Mountainous stretch of coastline between Tijuana and Ensenada, Baja California

The topology of the Southern California Bight is varied, featuring alluvial plains and marine terraces broken up by mountains of the Transverse and Peninsular Ranges. Numerous islands lie off the coast, the largest of which is Santa Cruz Island of the Channel Islands.

The northern and central portions of the bight are largely urbanized within the Greater Los Angeles and San Diego-Tijuana metropolitan areas, while the rest remains largely rural. Other major cities located along the bight include Santa Barbara, Ventura, Oxnard, Playas de Rosarito, and Ensenada.

There is a difference in monthly mean temperature of 50 °F (10 °C) between the cities of Los Angeles and San Diego. Most precipitation in this coastal area takes place in the months of December, January, and February with a monthly mean rate of 2.0–3.3 inches (51–84 mm)

Phytoplankton serve an important role in the Southern Californian coastal ecosystem. These single-celled organisms are the main food source for zooplankton and help support the fish population. In doing so, they help establish a stable food chain for all the animals in the coastal region. Since the population of fish is directly related to the production of phytoplankton, the growth in phytoplankton numbers increases the yield of local fisheries. 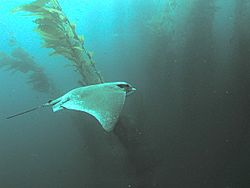 Basking sharks (Cetorhinus maximus) are being studied through a research program begun in 2009 by NOAA.

Common fish found in the epipelagic zone include:

Common fish found in the neritic zone include:

Common fish found in the rocky intertidal zone include:

Many different species of fish rely on the kelp forests as a source of life. Populations of fish are larger in areas with a higher concentration of kelp. Fish that live in and rely on kelp forests include kelp surfperch (Brachyistius frenatus), kelp bass (Paralabrax clathratus), giant kelpfish (Heterostichus rostratus), and kelp rockfish (Sebastes atrovirens). A study conducted near San Luis Obispo, California showed that when kelp was removed from a nearby reef, fish biomass declined by 63%. Juvenile fish rely on kelp beds a nursery grounds. Southern California Edison built a 174-acre kelp reef (70 ha) off San Clemente in 2008. 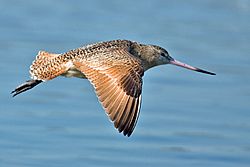 The Southern California Bight is home to 195 species of birds, including endangered species such as the light-footed clapper rail (Rallus longirostris levipes). Some birds nest and hunt near bodies of waters, such as bays, harbors, and oceans, including areas where kelp grows. Some species, such as the brown pelican and some species of cormorants commonly dive head first into the water, attempting to catch fish. Other species of birds, such as grebes and loons migrate from Baja California over the nearshore waters, and will stop to fish and feed. Birds that live in the rocky shore have adapted to finding food, and specialize in prying grabbing prey that clings to the rocky shore. Common birds of the rocky seashore include black oystercatchers (Haemotopus bachmani), wandering tattlers (Heteroscelus incanus), and Surfbirds (Aphorize virgata). Other birds, such as sandpipers, egrets, and herons utilize tidal patterns, venturing out to rocks during low tide in hopes of catching prey. Non-seabirds also nest on rocky seashore surfaces. Peregrine falcons and ravens are known to nest on remote sea cliffs. Sandy beaches are inhabited by plovers, terns, marbled godwits (Limosa fedoa), and several species of gulls.

Due to its central location of warm and cool ocean currents, the Southern California Bight sees a wide variety of marine mammals. Some reside here regularly, some pass through on migratory routes, and others only show up to utilize a certain food source. The Marine Mammal Protection Act and Endangered Species Act helped to prevent any marine mammal "take", which entails hunting, harassing, exploiting marine mammals for their pelt, meat, oil, etc.

The Southern California Bight is characterized by coastal and offshore oil reserves. For the past century, the offshore areas of coastal cities such as Goleta, Santa Monica, and Huntington Beach have been home to oil extraction sites. With the presence of these oil reserves comes the construction of relative infrastructure including pipelines.

All content from Kiddle encyclopedia articles (including the article images and facts) can be freely used under Attribution-ShareAlike license, unless stated otherwise. Cite this article:
Southern California Bight Facts for Kids. Kiddle Encyclopedia.