Kids Encyclopedia Facts
This page is about the region. For the body of water, see Tampa Bay. For the city at the hub of the area, see Tampa, Florida.

The largest cities in the Tampa Bay Area are Tampa in Hillsborough County, and the cities of St. Petersburg and Clearwater in Pinellas County. The Tampa Bay area may also refer to the Tampa Bay media market which also includes Citrus, Manatee, Sarasota, and Polk counties.

The following is a list of important cities and unincorporated communities located in both the core Tampa–St. Petersburg–Clearwater MSA.

Each of these cities has a population in excess of 100,000 inhabitants. 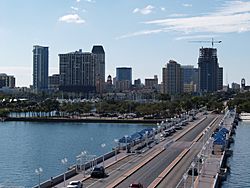 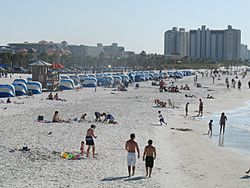 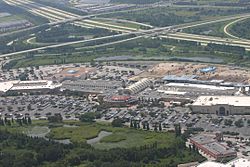 According to the 2000 U.S. Census, the Tampa–St. Petersburg–Clearwater MSA consists of the following ethnic demographics:

Hispanic or Latino by Origin 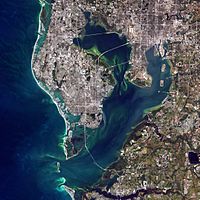 The Tampa Bay area has a humid subtropical climate (Koppen Cfa), with hot, humid summers, with daily thunderstorms, and dry, often sunny winters. On average, two days experience frost per year in the Tampa Bay area; however, hard freezes (low temperatures below 28 F/-3.5 C) are very rare, occurring only a few times in the last 75 years. The area is listed by the United States Department of Agriculture as being in hardiness zone 9b, which is about the northern limit of where coconut palms and royal palms can be grown. Highs usually range between 65 and 95 °F (18 and 35 °C) year round. Surprisingly to some, Tampa's official high has never reached 100 °F (38 °C)—the all-time record high temperature is 99 °F (37 °C). St. Petersburg's all-time record high is exactly 100 °F (38 °C). 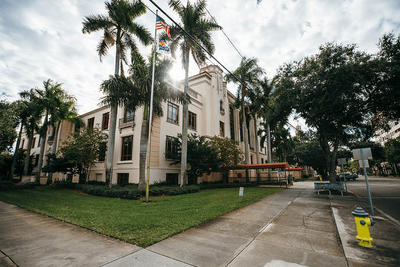 Pinellas County lies on a peninsula between Tampa Bay and the Gulf of Mexico, and much of the city of Tampa lies on a smaller peninsula jutting out into Tampa Bay. This proximity to large bodies of water both moderates local temperatures and introduces large amounts of humidity into the atmosphere. In general, the communities farthest from the coast have more extreme temperature differences, both during a single day and throughout the seasons of the year. 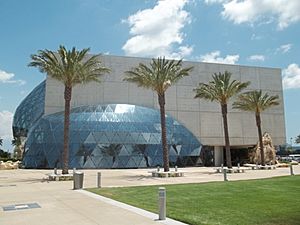 The Tampa Bay area is home to a high concentration of quality art museums. Long established communities, particularly those near the bay such as Cuban influenced Ybor City, Old Northeast in St. Petersburg, and Palma Ceia and Hyde Park in Tampa contain historic architecture. Fresh seafood and locally grown produce are available in many restaurants and in weekly farmers' markets in multiple urban centers in the area. Yuengling, the largest American-owned brewer, operates a brewery in Tampa, as does the highly regarded craft brewer Cigar City Brewing. 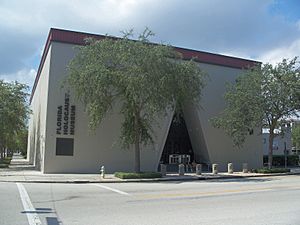 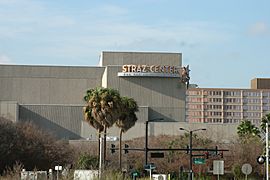 Straz Center for the Performing Arts in Tampa 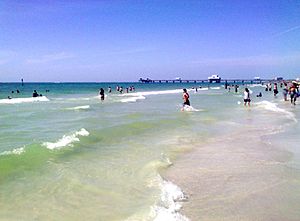 The Tampa Bay area is highly noted for its beaches, with the warm, blue gulf waters and nearly 70 miles of barriers islands from North Pinellas south to Venice, attracting tourists from all over the world. Three of the beaches in this area, Fort De Soto's North Beach (2005), Caladesi Island (2008), and Sarasota's Siesta Key (2011) have been named by Dr. Beach as America's Top Beach. The 15th IIFA Awards would be held at Tampa Bay Area in April 2014.

Sports attractions, in addition to the teams listed below, include many professional quality golf courses, tennis courts, and pools. Ybor and the Channel District in Tampa, downtown St. Petersburg, and the beaches all along the coast all attract a vibrant nightlife. 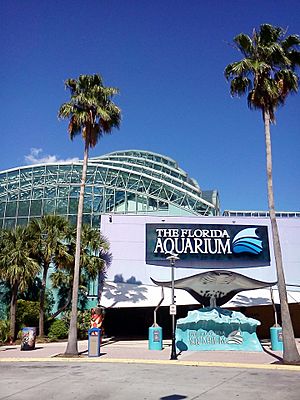 The Tampa Bay area is home to an extensive system of state, county, and city parks. Hillsborough River State Park in Thonotosassa is one of Florida's original eight state parks and Honeymoon Island State Park, near Dunedin, is Florida's most visited state park. Pinellas County is home to the Fred Marquis Pinellas Trail, a 37-mile running and cycling trail over a former railroad bed connecting Tarpon Springs to St. Petersburg. Skyway Fishing Pier State Park, the remnants of the approaches to the original Sunshine Skyway Bridge forms the world's largest fishing pier in Pinellas and Manatee counties. The shallow waters and many mangrove islands of the bay and gulf make the area popular with kayakers. The gulf is also home to a large number of natural and artificial coral reefs that are popular for fishing and scuba diving.

Tampa International Airport is the largest airport in the region with 21 carriers and more than 17 million passengers served last year. In addition to the recent opening of a new terminal, improvements are being planned to handle 25 million passengers by 2020. Traveler satisfaction has always been a top priority for "America's Favorite Airport." It has won high recognition in the international J.D. Power and Associates Global Airport Passenger Satisfaction Study for three consecutive years. The Condé Nast Traveler recognized TIA as the third best airport in the world and IATA Skytrax 2003 survey named TIA as the No. 2 airport in North America.

St. Petersburg–Clearwater International Airport provides access to commercial airliners, and smaller charter craft. The airport is currently planning an expansion which will include new terminal facilities and runway extension. Dotting the landscape throughout the area, are many general aviation airports for the aircraft enthusiast and smaller corporate jets.

CSX provides freight rail service for the entire Tampa Bay region. The railroad serves every major population and industrial center east of the Mississippi including Ontario and Montreal. CSX also connects with more than 166 bulk intermodal distribution terminals and rail-to-truck bulk transloading facilities throughout its service area, linking it to all of North America. 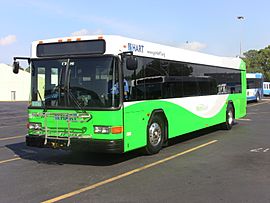 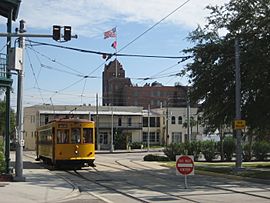 On July 1, 2007, an intermodal transportation authority was created to serve the seven county Tampa Bay area. The Tampa Bay Area Regional Transportation Authority (TBARTA) was formed to develop bus, rapid transit, and other transportation options for the region.

The Tampa Bay Area is served by these interstate highways.

Hillsborough County is also served by other roadways such as the Lee Roy Selmon Expressway (SR 618) which commutes workers from Brandon into downtown Tampa and the Veterans Expressway/Suncoast Parkway (Toll 589) which serves traffic from the Citrus/Hernando County border southward into Tampa.

In Pinellas County, U.S. 19 is the main north–south route through the county, and is being upgraded to freeway standards complete with frontage roads to ease congestion through the north part of the county. Also, the Bayside Bridge allows traffic to go from Clearwater into St. Petersburg without having to use U.S. 19.

The Courtney Campbell Causeway (SR 60) is one of the three roads that connect Pinellas County to Hillsborough County across the bay. The other two are the Howard Frankland Bridge (I-275) and Gandy Bridge (U.S. 92). The Sunshine Skyway Bridge is part of I-275 and connects Bradenton and other Manatee County and Sarasota County commuters into Pinellas County.

All content from Kiddle encyclopedia articles (including the article images and facts) can be freely used under Attribution-ShareAlike license, unless stated otherwise. Cite this article:
Tampa Bay Area Facts for Kids. Kiddle Encyclopedia.