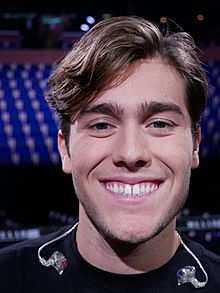 Benjamin Daniele Wahlgren Ingrosso, (born 14 September 1997) is a Swedish singer and songwriter. When he was a child he appeared in the leading role in several musicals, and in 2006 he won the song contest Lilla Melodifestivalen with the song "Hej Sofia". He won the celebrity dancing TV-show Let's Dance 2014 and has participated twice in Melodifestivalen in 2017 and 2018 respectively. He won in 2018 and represented Sweden in the Eurovision Song Contest 2018 with the song "Dance You Off", placing in seventh place.

All content from Kiddle encyclopedia articles (including the article images and facts) can be freely used under Attribution-ShareAlike license, unless stated otherwise. Cite this article:
Benjamin Ingrosso Facts for Kids. Kiddle Encyclopedia.