Economy of Texas facts for kids

The economy of the State of Texas is the second largest by GDP in the United States after that of California. It has a gross state product of $2.0 trillion as of 2021. As of 2015, Texas is home to six of the top 50 companies on the Fortune 500 list and 51 overall (third most after New York and California). In 2017, Texas grossed more than $264.5 billion a year in exports—more than the exports of California ($172 billion) and New York ($77.9 billion) combined.

As a sovereign country (2016), Texas would be the 10th largest economy in the world by GDP, ahead of South Korea and Canada and behind Brazil. For 2019 Texas's household income was $67,444 in ranking 26th in the nation. The state debt in 2012 was calculated to be $121.7 billion, or $7,400 per taxpayer. Texas has the second largest population in the country after California. 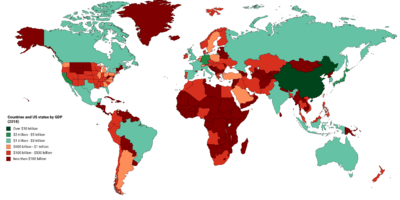 Texas compared to other countries GDP is in the same range as Canada, Australia, Russia, the Netherlands, or South Korea (corresponding with the Department of Finance figures in 2005). 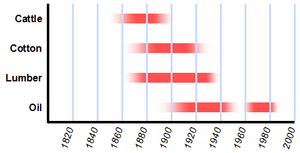 Boom periods of the four major industries that built the early Texas economy.

Historically four major business enterprises shaped the Texas economy prior to World War II: cattle and bison, cotton, timber, and oil. The first enterprise to enjoy major success in Texas was cattle and bison. In the early days of Anglo-American settlement furs and hides were the major products derived from cattle. Beef was not particularly popular in the United States. However soon Texas entrepreneurs pioneered the beef industry and demand steadily increased. The cattle industry enjoyed its greatest financial success in the later 1870s and 1880s.

Cotton production, which had been known in Texas since Spanish times, gradually increased throughout the 19th century. By the early 20th century Texas had become the leading cotton producer in the nation. By the 1920s the cotton industry was past its peak as government regulation and foreign competition took their toll.

The forests of Texas have been an important resource since its earliest days and have played an important role in the state's history. The vast woodlands of the region, home to many varieties of wildlife when Europeans first arrived, provided major economic opportunities for early settlers. They today continue to play an important role economically and environmentally in the state.

The densest forest lands lie in the eastern part of the state. In particular the Big Thicket region, just north of Houston and Beaumont, has historically been home to the most dense woodlands. The Big Thicket was mostly uninhabited until heavy settlement from the U.S. began in the mid-19th century, and was even used as a refuge by runaway slaves and other fugitives. The Rio Grande valley in South Texas was home to a large palm tree forest when Spaniards first arrived, though today very little of it remains.

The development of railroads in the eastern part of the state during the mid-19th century led to a boom in lumber production in the 1880s. This era of financial success lasted approximately 50 years finally coming to an end as Texas' forests were decimated and the Great Depression dropped prices.

In 1901 the Gladys City Oil, Gas, and Manufacturing Company struck oil on Spindletop Hill in Beaumont. Though petroleum production was not new, this strike was by far the largest the world had ever seen. The find led to widespread exploration throughout Texas and neighboring states. By 1940 Texas was firmly established as the leading oil producer in the U.S. 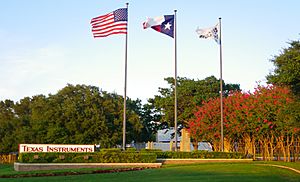 The headquarters of Texas Instruments

Texas remained largely rural until World War II though the success of the petroleum industry rapidly expanded the economy with heavy industry of many types taking root. The second world war created tremendous demand for petroleum and a variety of products that Texas was in a unique position to provide. By the end of the war Texas was one of the leading industrial states and the population had become predominantly urban. Additionally the economy had diversified sufficiently that, though petroleum was still the largest sector by the end of the war, the business community in the state was truly diverse. 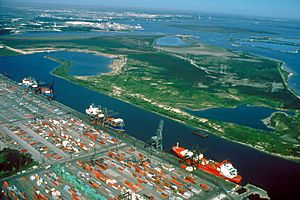 In 2014, for the thirteenth year in a row, Texas led the United States in export revenues. Texas exports for 2008 totaled $192.2 billion. In 2002, the Port of Houston was 6th among the top sea ports in the world in terms of total cargo volume;

All content from Kiddle encyclopedia articles (including the article images and facts) can be freely used under Attribution-ShareAlike license, unless stated otherwise. Cite this article:
Economy of Texas Facts for Kids. Kiddle Encyclopedia.