History of Delaware facts for kids

The history of Delaware as a political entity dates back to the early colonization of North America by European-American settlers. It is made up of three counties established since 1638, before the time of William Penn. Each had its own settlement history. Their early inhabitants tended to identify more closely with the county than the colony or state. Large parts of southern and western Delaware were thought to have been in Maryland until 1767. All of the state has existed in the wide economic and political circle of Philadelphia.

Before Delaware was settled by Europeans, the area was home to the Delaware (also known as Lenni Lenape), Susquehanna, and other Native American tribes. 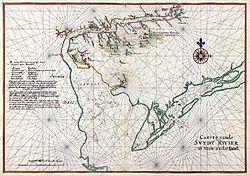 The Delaware watershed was claimed by the English based on the explorations of John Cabot in 1497, Captain John Smith, and others, and was given the name held as a title by Thomas West, 3rd Baron De La Warr, the governor of Virginia from 1610 until 1618. At that time the area was considered to be part of the Virginia colony.

However, the Dutch thought they also had a claim, based on the 1609 explorations of Henry Hudson, and under the auspices of the Dutch West India Company were the first Europeans to actually occupy the land. They established trading-posts: Fort Wilhelmus in 1624 at "Hooghe Eyland" (High Island), now Burlington Island, opposite Burlington, New Jersey; Fort Nassau, near Gloucester City, New Jersey, in 1626; and at Zwaanendael, now Lewes, Delaware, in 1631. Peter Minuit was the Dutch Director-General of New Netherland during this period and probably spent some time at the Burlington Island post, thereby familiarizing himself with the region.

In any case, Minuit had a falling out with the directors of the Dutch West India Company, was recalled from New Netherland, and quickly made his services available to his many friends in Sweden, then a major power in European politics. They established a Swedish South Company, aimed at settling the territory of New Sweden, and, following much negotiation, he led a group under the flag of Sweden to the Delaware River in 1638. They established a trading post at Fort Christina, now in Wilmington. Minuit claimed possession of the western side of the Delaware River, saying he had found no European settlement there. Unlike the Dutch West India Company, the Swedes intended to actually bring settlers to their outpost and begin a colony.

Minuit drowned in a hurricane on the way home that same year, but the Swedish colony continued to grow gradually. By 1644, Swedish and Finnish settlers were living along both sides of the Delaware River from Fort Christina to the Schuylkill River. New Sweden's best known governor, Johan Björnsson Printz, moved his residence to what is now Tinicum Township, Pennsylvania, where he intended to concentrate the settlements.

While the Dutch settlement at Zwaanendael ("swan valley"), or present-day Lewes, was soon destroyed in a war with Native Americans, the Dutch never gave up their claim to the area, and in 1651, under the leadership of Peter Stuyvesant, built Fort Casimir, now New Castle. Three years later, in 1654, Johan Risingh, the Swedish governor, captured Fort Casimir from the Dutch. For the Swedes, this was a catastrophic miscalculation, as the next summer, 1655, an enraged Stuyvesant led another Dutch expedition to the Delaware River, attacked all the Swedish communities and forcibly ended the New Sweden colony, incorporating the whole area back into the New Netherland colony.

It was not long, though, before the Dutch too were forcibly removed by the English, who asserted their earlier claim. In 1664, James, the Duke of York and brother of King Charles II, outfitted an expedition that easily ousted the Dutch from both the Delaware and Hudson rivers, leaving the Duke of York the proprietary authority in the entire area.

But Cecil Calvert, 2nd Baron Baltimore, Proprietor of Maryland, claimed a competing grant to lands on the western shore of Delaware Bay, including all of the present state of Delaware. In deference to the royal will of Charles II to please his brother, James, Duke of York, Calvert did not press his claim. James, the Duke of York, believed he had won the area in war and was justified in ownership. The area was administered from New York as a part of James' New York colony.

William Penn was granted "Pennsylvania", which grant specifically excluded New Castle or any of the lands within 12 miles (19 km) of it. Nevertheless, Penn wanted an outlet to the sea from his new province. He persuaded James to lease him the western shore of Delaware Bay. So, in 1682, Penn arrived in New Castle with two documents: a charter for the Province of Pennsylvania and a lease for what became known as "the Lower Counties on the Delaware".

Penn had inherited James' claims and thus began nearly 100 years of litigation between Penn and Baltimore, and their heirs, in the High Court of Chancery in London. The settlement of the legal battles was started by the heirs' agreeing to the survey performed by Charles Mason and Jeremiah Dixon between 1763 and 1767. Their work resulted in the famous Mason–Dixon line. The final adjudication of the settlement was not completed until the eve of the American Revolution. The settlement was a major reason for the close political alliance between the property owners of the Lower Counties and the Royalist Proprietary government.

The Mason–Dixon line forms the boundary between Delaware and Maryland; this begins at the Transpeninsular Line. The border between Pennsylvania and Delaware is formed by an arc known as the Twelve-Mile Circle laid out in the seventeenth century to clearly delineate the area within the sphere of influence of New Castle. A small dispute lingered until 1921 over an area known as the Wedge, where the Mason–Dixon line and the Twelve-Mile Circle left a fragment of land claimed by both Pennsylvania and Delaware.

Delaware was one of the Thirteen Colonies which revolted against British rule in the American Revolution. After the Revolution began in 1776, the three counties became "The Delaware State", and in 1776 that entity adopted its first constitution, declaring itself to be the "Delaware State". Its first governors went by the title of "President".

The Battle of Cooch's Bridge was the only major military engagement of the Revolution that took place on Delaware soil. The engagement began August 30, 1777, about 2 miles (3 km) south of Cooch's Bridge (located in present-day Newark). The Americans harried the lead forces of the British Army. However, the roughly 700 colonials were greatly outmanned and outgunned. Washington's troops were slowly driven back.

By September 3, the colonials had dropped back to Cooch's Bridge. A handpicked regiment of 100 marksmen under General William Maxwell laid an ambush in the surrounding cover. Over the ensuing battle, several British and Hessian charges were repelled, but the Americans soon depleted their ammunition and called a retreat.

The property was taken by the British, and several buildings were burned. General Cornwallis used the Cooch house as his headquarters for the next week as the British regrouped. American casualties numbered around 30.

Shortly afterward, General Howe moved his troops out. On September 11, he defeated the colonials in the Battle of Brandywine and subsequently captured the colonial capital of Philadelphia.

In 1783, the independence of the United States and therefore Delaware was confirmed in the Treaty of Paris.

Delaware was the first state to ratify the United States Constitution.

Éleuthère Irénée du Pont arrived in America from France in 1800 and founded the young United States' largest gunpowder factory on the banks of the Brandywine River just north of Wilmington in 1804. His DuPont firm (now the world's fourth largest chemical company) was the U.S. military's largest supplier of gunpowder by the beginning of the Civil War, and his descendants, the du Pont family, are now one of the richest and most successful families in the country.

The oldest African American church in the country was chartered in Delaware by former slave Peter Spencer in 1813 as the "Union Church of Africans", which is now the A.U.M.P. Church. The Big August Quarterly which began in 1814 is still celebrated and is the oldest such cultural festival in the country.

The construction of the Chesapeake and Delaware Canal between 1802 and 1829 brought significant shipping interests to Delaware, expanding the state's commercial opportunities.

Delaware in the Civil War

Slavery had been a divisive issue in Delaware for decades before the American Civil War began. Opposition to slavery in Delaware, imported from Quaker-dominated Pennsylvania, led many slaveowners to free their slaves; half of the state's black population was free by 1810, and more than 90% were free by 1860. This trend also led conservative legislators to restrict free black organizations, and the constabulary in Wilmington was accused of harsh enforcement of runaway slave laws while many Delawareans kidnapped free blacks among the large communities throughout the state and sold them to plantations further south.

During the Civil War, Delaware was a slave state that remained in the Union. (Delaware voters voted not to secede on January 3, 1861.) Delaware had been the first state to embrace the Union by ratifying the constitution, and would be the last to leave it, according to Delaware's governor at the time.

The government of Delaware never formally abolished slavery; however, a large portion of the state's slave owners voluntarily freed their slaves.

Two months before the end of the Civil War, on February 8, 1865, Delaware voted to reject the 13th Amendment to the United States Constitution and so voted unsuccessfully to continue slavery beyond the Civil War. Delaware symbolically ratified the amendment on February 12, 1901–40 years after Lincoln's Emancipation Proclamation. Slavery ended in Delaware only when the Thirteenth Amendment took effect in December 1865. Delaware also rejected the 14th Amendment during the Reconstruction Era.

Even though Delaware is nominally a northern state, and was mostly aligned with the Union during the American Civil War, it nonetheless was de facto and de jure segregated. Fearful that the 1875 Civil Rights Act passed by Congress might establish social equality, Delaware legislators passed Jim Crow laws in 1875,

The end result of the Gebhart and Brown litigation was that Delaware became fully integrated, albeit with time and much effort. Unfortunately, some argue that while the state of race relations was dramatically improving post-Brown, any progress was destroyed in the wake of the rioting which broke out in Wilmington in April 1968 in the wake of the assassination of Dr. Martin Luther King, Jr. in Memphis. Delaware's response to the Wilmington riots was heavy-handed in the opinion of some, involving the virtual occupation of the city for over one year by the Delaware National Guard.

All content from Kiddle encyclopedia articles (including the article images and facts) can be freely used under Attribution-ShareAlike license, unless stated otherwise. Cite this article:
History of Delaware Facts for Kids. Kiddle Encyclopedia.