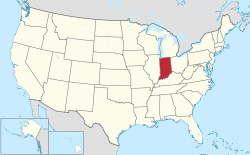 Map of the United States with Indiana highlighted

Indiana is a state located in the Midwestern United States. As of the 2019 census estimate, the state had 6,732,219 residents.

Under Indiana law, a municipality must have a minimum of 2,000 people to incorporate as a city. Except as noted, all cities are "third-class" cities with a seven-member city council and an elected clerk-treasurer. "Second-class" cities had a population of at least 35,000 and up to 600,000 at time of designation, and have a nine-member city council and an elected clerk. Indianapolis is the only "first-class" city in Indiana under state law, making it subject to a consolidated city-county government known as Unigov.

All content from Kiddle encyclopedia articles (including the article images and facts) can be freely used under Attribution-ShareAlike license, unless stated otherwise. Cite this article:
List of cities in Indiana Facts for Kids. Kiddle Encyclopedia.