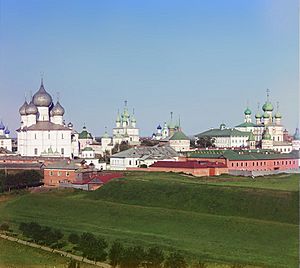 Rostov Kremlin in summer (1911)
This article is about a town in Yaroslavl Oblast. For the administrative centre of Rostov Oblast, see Rostov on Don.

Rostov (Russian: Росто́в; Old Norse: Rostofa) is one of the oldest towns in Russia. It was first mentioned in the year 862 as an already important town. By the 13th century Rostov became the capital of an important area.

Now it is an important tourist centre of the so called Golden ring. It is located on the shores of Lake Nero in Yaroslavl Oblast. About 35,300 people lived there in 2002.

All content from Kiddle encyclopedia articles (including the article images and facts) can be freely used under Attribution-ShareAlike license, unless stated otherwise. Cite this article:
Rostov Facts for Kids. Kiddle Encyclopedia.