A map of the Small Island Developing States. 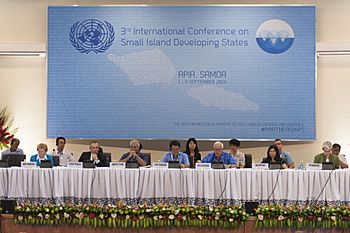 Small Island Developing States (SIDS) are low-lying coastal countries. They share similar problems because of their size. Some of these problems are: small but growing populations, limited resources, and long distances from other countries.

The SIDS were first seen as a distinct group of developing countries at the United Nations Conference on Environment and Development in June 1992. The Barbados Programme of Action was made in 1994 to help the SIDS to develop.

Currently, the United Nations Department of Economic and Social Affairs lists 52 small island developing states. These are broken down into three geographic regions: the Caribbean; the Pacific; and Africa, Indian Ocean, Mediterranean and South China Sea (AIMS). Each of these regions has a regional organisation for cooperation: the Caribbean Community, the Pacific Islands Forum and the Indian Ocean Commission.

All content from Kiddle encyclopedia articles (including the article images and facts) can be freely used under Attribution-ShareAlike license, unless stated otherwise. Cite this article:
Small Island Developing States Facts for Kids. Kiddle Encyclopedia.