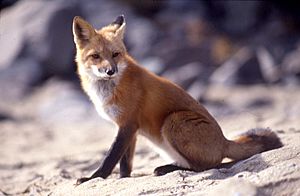 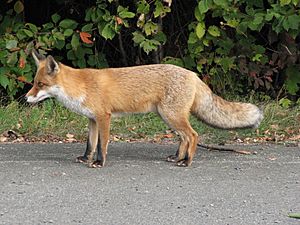 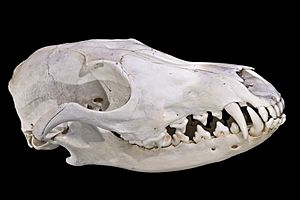 The red fox (Vulpes vulpes) is a mammal of the order Carnivora. It is the largest and most well-known species of fox. Red foxes are sometimes hunted for sport, or killed as pests or carriers of rabies. 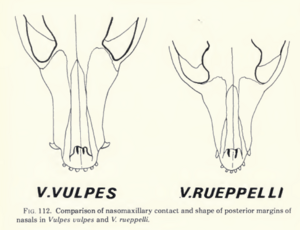 The red fox is considered a more specialised form of Vulpes than the Afghan, corsac and Bengal foxes in the direction of size and adaptation to carnivory; the skull displays far fewer neotenous traits than in other species, and its facial area is more developed. It is, however, not as adapted for a purely carnivorous diet as the Tibetan fox.

Red foxes have short legs, pointed triangular black ears, a pointed snout, and a long bushy tail tipped in white. Like a cat's, the fox's thick tail helps it balance, but it has other uses as well. The tail (or "brush") of a red fox can be like a flag to communicate with other red foxes. The tail is also something of a food store.

Foxes also communicate with each other by urinating on trees or rocks, like dogs sometimes do. Its back, sides, and head are usually covered with orangish-red fur, and its neck and chest are covered with white fur. Its legs and paws are normally black.

Red foxes hunt alone. Because they are carnivorous, they feed on rodents, birds, rabbits, and other small animals. However, some red foxes eat fruit and vegetables, fish, frogs, and even worms. The red fox will continue to hunt even when it is full. It stores leftover food to eat later. When they are raised by humans domestically, they can also eat pet food. Red Foxes hunt mostly at night, sunset, and dawn.

When prey has been detected, the fox crouches low to the ground and moves towards it, while attempting to minimize any noise or visual warnings. During the approach, the fox´s eyes remain on its prey. A chase starts once the fox has been seen, the prey escaping through dense bushes, or in the fox disabling it by biting it in the legs.

Red foxes usually mate in the winter. The vixen (female fox) normally gives birth to a litter of 2 to 12 pups. When red foxes are born, they are brown or gray. Although a new red coat usually grows in one month, some red foxes have other colored coats such as golden, reddish-brown, silver, or even black. The mother of the pups feed them at first by regurgitating food into their mouths.

Foxes generally do not sleep in dens unless they are females who are giving birth to or raising cubs. Female foxes seek out dens made by other animals, like rabbits or badgers, but will dig their own den if necessary. Foxes in the wild curl up in a ball out in the open to sleep, keeping warm by covering themselves with bushy tails. Foxes live in urban areas sleep under structures such as sheds.

Distribution of the red fox today

It is native to America, Asia, and Europe. It was introduced to Australia in the 19th century.

All content from Kiddle encyclopedia articles (including the article images and facts) can be freely used under Attribution-ShareAlike license, unless stated otherwise. Cite this article:
Red fox Facts for Kids. Kiddle Encyclopedia.