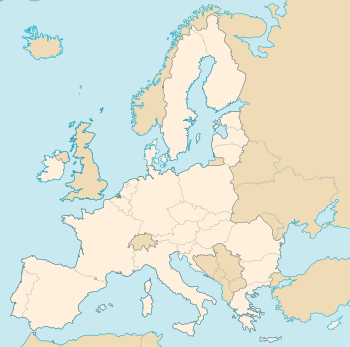 Following the addition of Croatia in 2013, the EU's membership now stands at twenty-eight. Negotiations are also under way with other states. The process of enlargement is sometimes referred to as European integration. However, this term is also used to refer to the intensification of cooperation between EU member states as national governments allow for the gradual centralising of power within European institutions. Before being allowed to join the European Union, a state must fulfill the economic and political conditions generally known as the Copenhagen criteria: these basically require that a candidate member state must enjoy a secular, democratic system of government, together with the corresponding freedoms and institutions, and respect the rule of law. Under the terms of the Treaty on European Union, enlargement of the Union is conditional upon the agreement of each existing member state as well as approval by the European Parliament.

Bulgaria and Romania make up the second part of the EU's fifth enlargement, and joined the EU on 1 January 2007. This date was agreed upon at the Thessaloniki Summit in 2003, confirmed at Brussels on 18 June 2004, and affirmed by the country reports of October 2004 and the final report delivered on 26 September 2006. Bulgaria and Romania signed their Treaty of Accession on 25 April 2005 at a ceremony held at Neumünster Abbey in Luxembourg.

The United Kingdom was a former EU member state. It joined the European Economic Community on 1 January 1973. On 23 June 2016, 51.9% of voters chose to leave the EU. The country formally withdrew from the EU on 31 January 2020. This means there are 27 member states are left in the EU. 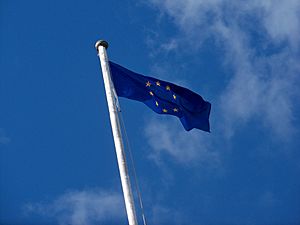 1 On 3 October 1990, the states of the former German Democratic Republic joined the Federal Rebulic of Germany, automatically becoming part of the EU.
2 Greenland left the Community in 1985.

All content from Kiddle encyclopedia articles (including the article images and facts) can be freely used under Attribution-ShareAlike license, unless stated otherwise. Cite this article:
European Union member state Facts for Kids. Kiddle Encyclopedia.