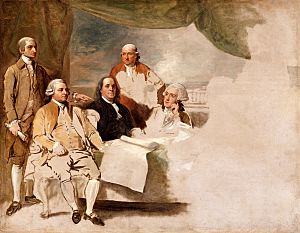 American commissioners who negotiated the treaty, in Paris. The painting was not finished, because the British commissioners refused to pose.

The Treaty of Paris, signed on September 3, 1783, ratified by the Congress of the Confederation on January 14, 1784 and by the King of Great Britain on April 9, 1784 formally ended the American Revolutionary War between the Kingdom of Great Britain and the United States of America.

Under the terms of the treaty, Britain recognized the new nation. It agreed to remove all troops from the nation and also set new borders of the United States. The United States agreed to allow British troops to leave and to pay all debts owed to Britain. They also agreed not to persecute the Tories (people loyal to the king, also known as loyalists) still in the United States and allow those who left America to return.

France and Spain, allies of the United States, also signed peace treaties at the same time. France got Tobago and Senegal and some other places. Spain wanted Gibraltar but got Menorca and Florida instead. The Netherlands signed later, didn't gain or lose land, but had to allow British trade in the Dutch East Indies. Mysore continued fighting for another year but also didn't gain or lose land.

All content from Kiddle encyclopedia articles (including the article images and facts) can be freely used under Attribution-ShareAlike license, unless stated otherwise. Cite this article:
Treaty of Paris (1783) Facts for Kids. Kiddle Encyclopedia.